FUNCTIONAL ACTIVITY AND pH OF THE CEREBRAL CORTEX12 [19]

The method used gives a continuous record of the pH of the cortex, its D.C. potentials, the respiration of the animal (natural or artificial), time and signals. This is done by photographing upon moving paper a screen (fig. 1, S) upon which are focused four light beams: two from Leeds and Northrup galvanometers (no. 2420), one for the pH, the other for the D.C. potential, the third from a mirror on a Marey tambour moving with the respiration, and the fourth recording time and signals.

At the times indicated on this record simultaneous electrocorticograms² have been obtained with amplifiers, a Westinghouse four-element oscillograph and its moving-paper camera. In detail the method was as follows (fig. 1) :

The pH is measured by the EMF developed between a glass electrode and an adjacent wick-saline electrode on the cortex.

The measuring circuit used consists of a potentiometer (P), a vacuum tube microvoltmeter (MV₁) and a galvanometer (Ga₁). The glass electrode is patterned after that of MacInnes and Dole (5) with a concave active area (Corning glass 015) less than 0.5 mm. in diameter. This electrode, supported by a spring so as to exert a small constant pressure on the cortex, effectively seals from contact with the air the minute volume of cerebro-spinal fluid between the electrode and the cortex.

The glass electrode is filled with a silver acetate-acetic acid buffer solution, into which projects a silver wire (fig. 2). This combination was found to give a stable electrode, which in the range of biological pH does not reverse polarity.

In ordinary pH determinations it is customary to use a saturated KCl salt bridge. Obviously this cannot be done on 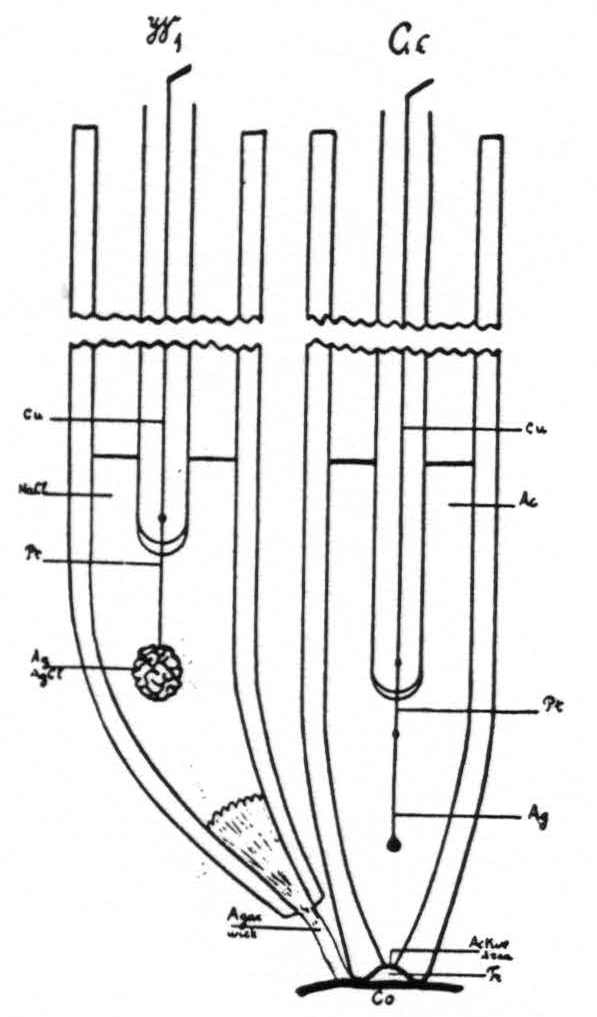 living tissue. Therefore, a physiologically normal NaCl solution was used as a bridge, into which dips a silver-silver chloride electrode (fig. 2, W₁), contact with the cortex being established through an agar wick. This system was carefully checked against phosphate and acetate buffers of known pH and found to be reproducible and to give the required differences in EMF (±0.01 pH).

The EMF of a phosphate buffer (pH = 6.83) was measured before and after each experiment and these determinations were found to agree within 1 millivolt; this shows that during the course of an experiment, even extending over many hours, the voltages were accurate within this limit. The phosphate buffer was assigned its pH value from measurements with a hydrogen-ion electrode in accordance with the pH scale described by Hitchcock and Taylor (6).

The measuring circuit is truly potentiometric, in which the potentiometer (fig. 1, P) at the start of each experiment was set so as to balance the voltage developed between the electrodes. The microvoltmeter (fig. 1, MV₁) of the type described by Burr, Lane and Nims (7) with a grid leak of 100 megohms makes it possible to measure the voltage accurately and does not pass enough current to polarize the glass electrode even when the potentiometer is several millivolts off balance. Thus the circuit is in balance when the galvanometer spot is in the center of the screen (fig. 1, S) and any deflection, indicating variation in voltage, is recorded continuously without further adjustment of the potentiometer. The deflections are found to be a linear function of the voltage differences.

Since the cortex exhibits D.C. potential gradients, it was essential to obtain a record of these gradients also. This was done with a separate microvoltmeter (MV₂), galvanometer (Ga₂) and two wick electrodes (W₁, W₂) as described above, one of which was also used for the pH measurement (fig. 1). These D.C. potential gradients were found small enough, even after electrical stimulation of the cortex, to be negligible in estimating its pH.

Whenever desired, a separate record of the electrical activity of the cortex was obtained, always through condensers, in order to insulate the animal from extraneous D.C. currents. From one to four channels of capacity-coupled amplifiers with various arrangements of pick-up electrodes were used in conjunction with a Westinghouse four-element oscillograph and a separate moving-paper camera. Corresponding times and signals were indicated on both records from a common signal circuit.

In those experiments in which electrical stimulation of the cortex was performed, it was always done with 60 cycle A.C. through condensers, disconnected from the animal except during the stimulation. Sixty cycle A.C. was used, 1) because its symmetrical wave form reduces polarization to a minimum, 2) because its long wave form results in a prolonged, marked after-discharge in the cortex even with small voltages.

The animal was always placed on a board, insulated by paraffin blocks from the shielded, grounded cage in which it was placed. The animal was grounded at one point only, i.e., through the wick electrode common to the pH and D.C. circuits. The glass electrode was always placed adjacent to this common wick electrode on the surface of the cortex; the position of the other electrodes was dictated by the experiment in question.

It is essential to ground, to shield and to insulate not only the animal, but also all other circuits involved.

All experiments reported in this paper were performed upon monkeys (Macaca mulatta). Usually the animals were fully anesthetized with Dia1,³ sometimes with the addition of curare. In a few animals the operative procedures were performed under ether; in these instances the animals during the actual experiment, were curarized.

Before presenting the results of these experiments we wish to state that in measuring the pH of the transudate on the surface of the cortex, one obtains a close approximation of the pH of the tissue subjacent to the glass electrode. A simple experiment proves this point. Thermocoagulation at 80°C. for 5 seconds of a small area of the cortex renders this killed area acid (e.g., pH = 6.6), while the pH of the immediately adjacent, normal cortex remains unchanged (e.g., pH = 7.3). An area so treated goes through two stages of vascularity. For the first 10 to 15 minutes after the thermocoagulation the area is blanched and presents a maximal vasoconstriction, subsequently the area becomes markedly hyperaemic and oedematous. Although the blood supplied to the cortex is indirectly a factor in determining the pH of the transudate, the above observation shows that the measured pH reflects primarily the acidity of the tissue, rather than changes in its vascularity or changes in the pH of the blood supplied to the cortex. This is not surprising, when one considers that the lymphatic drainage from the cortex is to the surface.

The results here presented are the following: 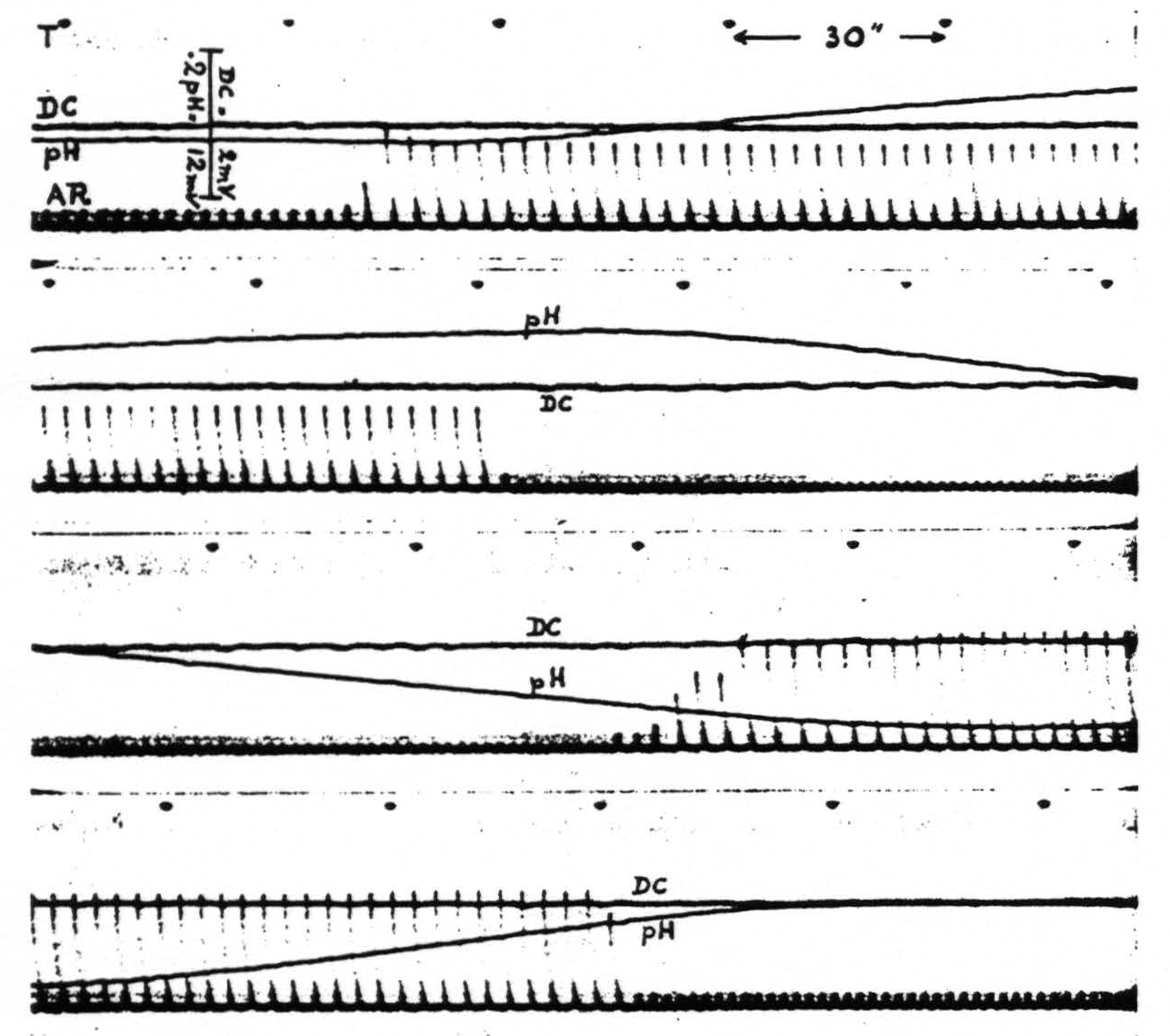 Figure 3. Monkey. Light Dial narcosis. Tracheal cannula. Curare. The four strips are continuous. T is time in half minutes. AR is artificial respiration. DC is potential between two wick electrodes about 2 mm. apart on cerebral cortex. pH is variation of potential between glass and one of the wick electrodes, also about 2 mm. apart on cortex; upward increase, downward decrease of pH.

Note that changes in artificial respiration are followed by shifts in pH without appreciable shift in D.C. potential, although the D.C. voltage sensitivity is six times as great.

Figure 5. Monkey. Dial. Curare. Upper record shows the changes in pH of the cortex under different ventilation. Downward shift of pH record is one toward acid side. Lower records electrocorticograins during these changes in pH. c₁ taken at period marked c in upper record, d₁ during d, e₁ during e and f₁ during f.

Figure 6. Monkey. Dial. Curare. This figure demonstrates the influence of an intravenous injection of dilute acid upon the pH of the cortex (upper record). The three lower records show the electrical activity of a cortical focus at various pH levels. Record a₁ taken during the period marked a in the upper record, b₁ during b and c₁ during c in the upper record.

In fact, the level of electrical activity seems to be determined largely by the pH of the cortex, irrespective of the manner in which the changes of the pH are brought about.

Intravenous injection of a few cubic centimeters of physiological saline solution, which does not change the pH of the cortex, does not alter its electrical activity.

given variation of the experimental conditions than in the narcotized animal. In this latency are comprised several factors, 1) of an instrumental nature (galvanometer, equilibration of the fluid confined underneath the glass electrode) and 2) physiological. If one considers that we measure the pH on the surface of the cortex, in all probability of its normal transudate, while most of the activity reflected in the pH of this transudate occurs in the deeper layers, this rather long latency is not surprising. Most of this latency is accounted for by the slowness of diffusion through the cortex and into and within the droplet of cerebro-spinal fluid confined underneath the glass electrode. It should be emphasized that while one does measure the actual pH of the cortex in any steady state, the observed pH during a change lags and probably never reproduces indicates as great a change as that which occurs at the site of disturbance.

In conclusion it seems advisable to point out that in experiments of this nature one must realize that stimulation of those cortical areas which control respiration and autonomic functions (i.e., especially area 6) produces alterations of pH and excitability which complicated the picture. For this very reason the experiments reported are those in which area 6 was not involved.

Hitchcock, D. I., and A. C. Taylor The standardization of hydrogen ion determinations. I. Hydrogen electrode measurements with a liquid junction. J. Am. Chem. Soc. (In press.)

1 Reprinted from the Journal of Cellular and Comparative Phvsiology. Vol. 10, No. 3, October, 1937. ↩
2 The expenses of this investigation were defrayed by a grant from the Fluid Research Funds of the Yale School of Medicine ↩