A CORTICO-BULBO-RETICULAR PATHWAY FROM AREA 4-s12 [70]

Recent interest in that part of the cerebral cortex forming the anterior portion of area 4, and called area 4-s, has derived from observations that destruction of this area is followed by signs of spasticity (1), while its stimulation inhibits the motor response from area 4, and suppresses the electrical activity of other cortical areas (2, 3, 4).

Some of the connections by way of which these activities are effected have been established. Arrest of cortical electrical activity has been shown to depend upon a recurrent circuit through the basal ganglia (5), but these structures were not found essential for the suppression of cortical motor response (3). Descending connections from 4-s, whose interruption results in spasticity, do not reach the bulbar pyramid (6), but some of them are present in the basis pedunculi (7). Studies of the myelinated fiber degeneration from area 4-s have shown its descending connections to accompany the cortico-spinal tract as far caudally as the pons (8, 9).

The recent demonstration of an inhibitory mechanism in the bulbar reticular formation (10, 11) made it of interest to determine whether cortical area 4-s was connected with this region.

In each of 8 monkeys under Dial3 anesthesia (0.45 cc. per K.), a 3-channel Grass amplifier and ink writer was used to record electrical activity of the cortex and of the brain stem. The cortical leads consisted of 2 silver electrodes applied to its surface. The brain stem lead, oriented with the horizontal carrier of the Horsley-Clarke instrument, consisted of a single length of nichrome wire or a beading needle, insulated except at the tip, and recording to ground at the inion. In the case of the nichrome wire electrode, the exposed tip was about 1 mm. in length; in the case of the beading needle, about 0.2 mm.

Strychnine (3 per cent) soaked filter paper was applied to area 4-s or other cortical areas, producing typical electrical “spikes,” and the lower brain stem was explored for related potential changes. The sites from which records were taken were determined from serial frozen sections through the explored region stained with Weil's method.

Upon large strychninizations intended for area 4-s, potential changes related to cortical spiking were recorded from two areas of the lower brain stem—the pyramidal tract and the bulbar reticular formation. Evidence to be presented indicates that those changes recorded from the bulbar reticular formation were initiated solely from area 4-s. It is likely that activity in the pyramidal tract was, on the other hand, initiated by activating adjacent or intermixed components of cortical area 4, for in instances in which it was recorded, motor twitches in the contralateral limbs were present at the height of activity.

Significance of potential changes. This activity in the pyramidal tract, presumed to be initiated from area 4, provided an opportunity for necessary clarification as to the form of the potential recorded from the brain stem at the site of the disturbance, and which was therefore of immediate localizing 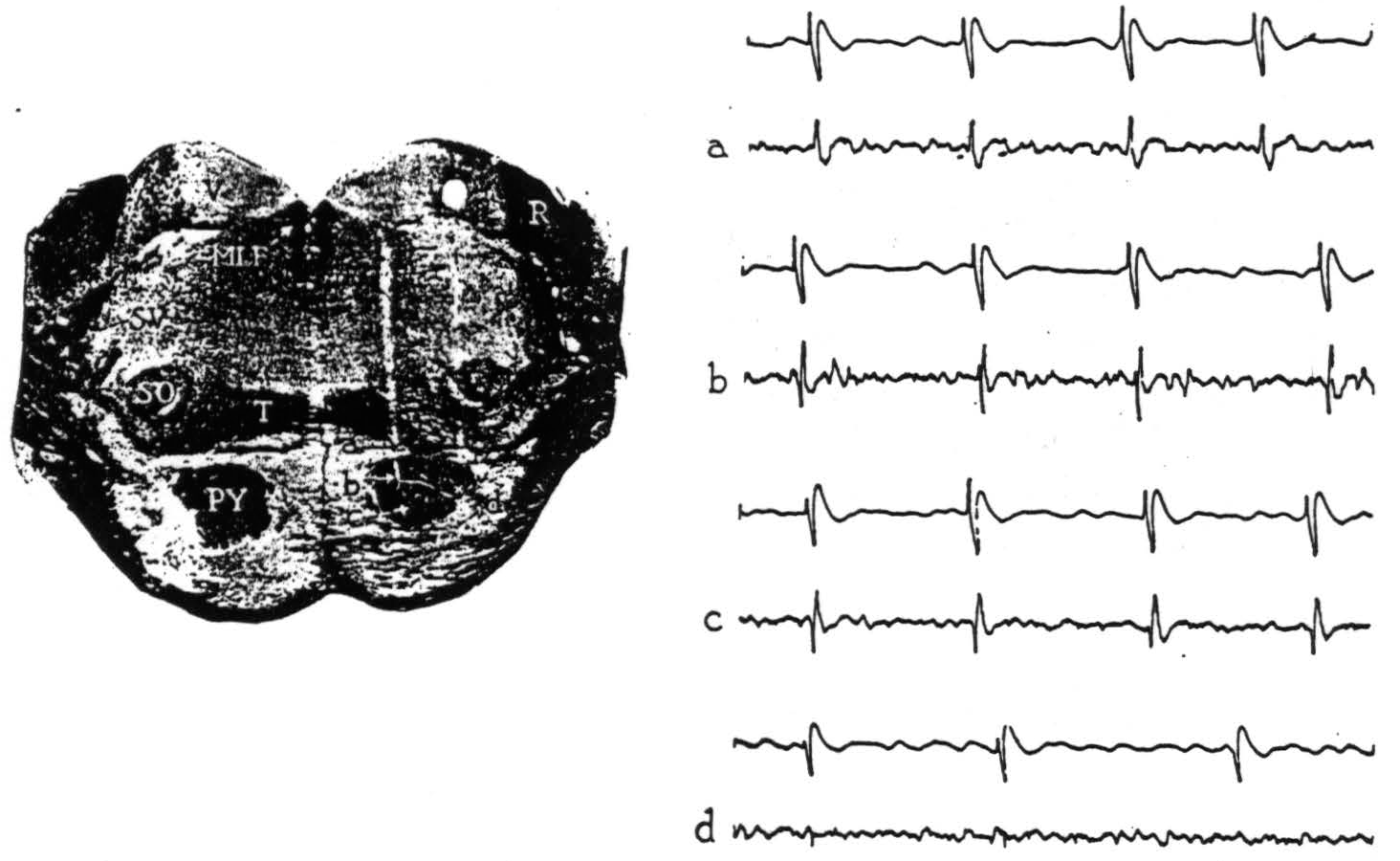 value, as opposed to that form of potential which indicated activity at a distance.

Upon strychninization of the cortex, the records obtained within and near the pyramidal tract in the pons are shown in Fig. 1. At 0.2 mm. above the pyramid, and at more dorsal points in the brain stem and indeed in the overlying cerebellum, initial negativity accompanied the cortical spikes (Fig. 1, record a). Whereas at points within the pyramid (Fig. 1, b, c, d), the full triphasic potential—positive, negative, positive—appeared.

These triphasic potentials, synchronous with strychnine spikes in the cortical lead, thus indicate discharging neural elements at the site of the recording electrode in the brain stem, and variations in their size (compare b and c with d, Fig. 1) appear to reflect differences in the number of discharging elements in immediate proximity to the electrode.

Projection from 4-s. The results obtained from a level in one monkey, in which cortical area 4-s was activated with strychnine and the bulbar reticular formation explored for related potential changes, are shown in Fig. 2. 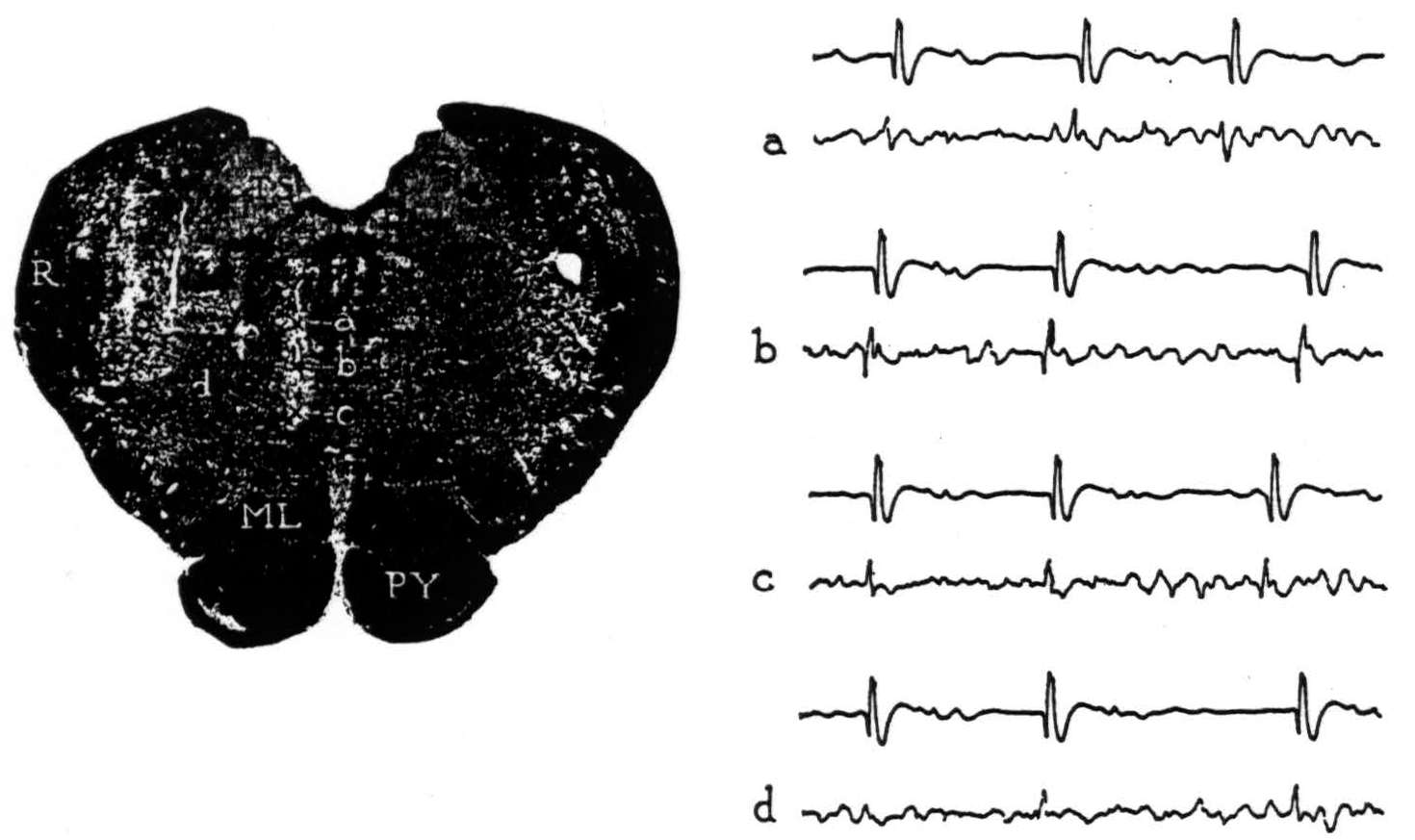 Figure 2. Section through the medulla oblongata with electrode punctures into the reticular formation. The accompanying electrode records were taken from points a, b, c and d. Strychnine activated area 4-s; the upper lead in each record is cortex, the lower lead is brain stem.

From point a, negative potentials were obtained. From point b, large, initially positive, triphasic potentials were recorded with each discharge of 4-s. From point c, an occasional, smaller positive spike was seen but most were negative. From point d, 1 mm. lateral, an occasional, very small positive spike was encountered but most were negative. No localizing potentials were found at other points on these and more lateral punctures. The results reveal a circumscribed area of the medial bulbar reticular formation from which potential changes of demonstrably significant form were recorded upon activating cortical area 4-s.

The localizing data gathered from all such exploration are summarized in Fig. 3, on a midsagittal reconstruction of the monkey's brain stem with the cerebral cortex superimposed. The plus symbols mark bulbar sites from which potential changes of significant form were recorded on activating cortical area 4-s. Though actually paramedian in position, their projection 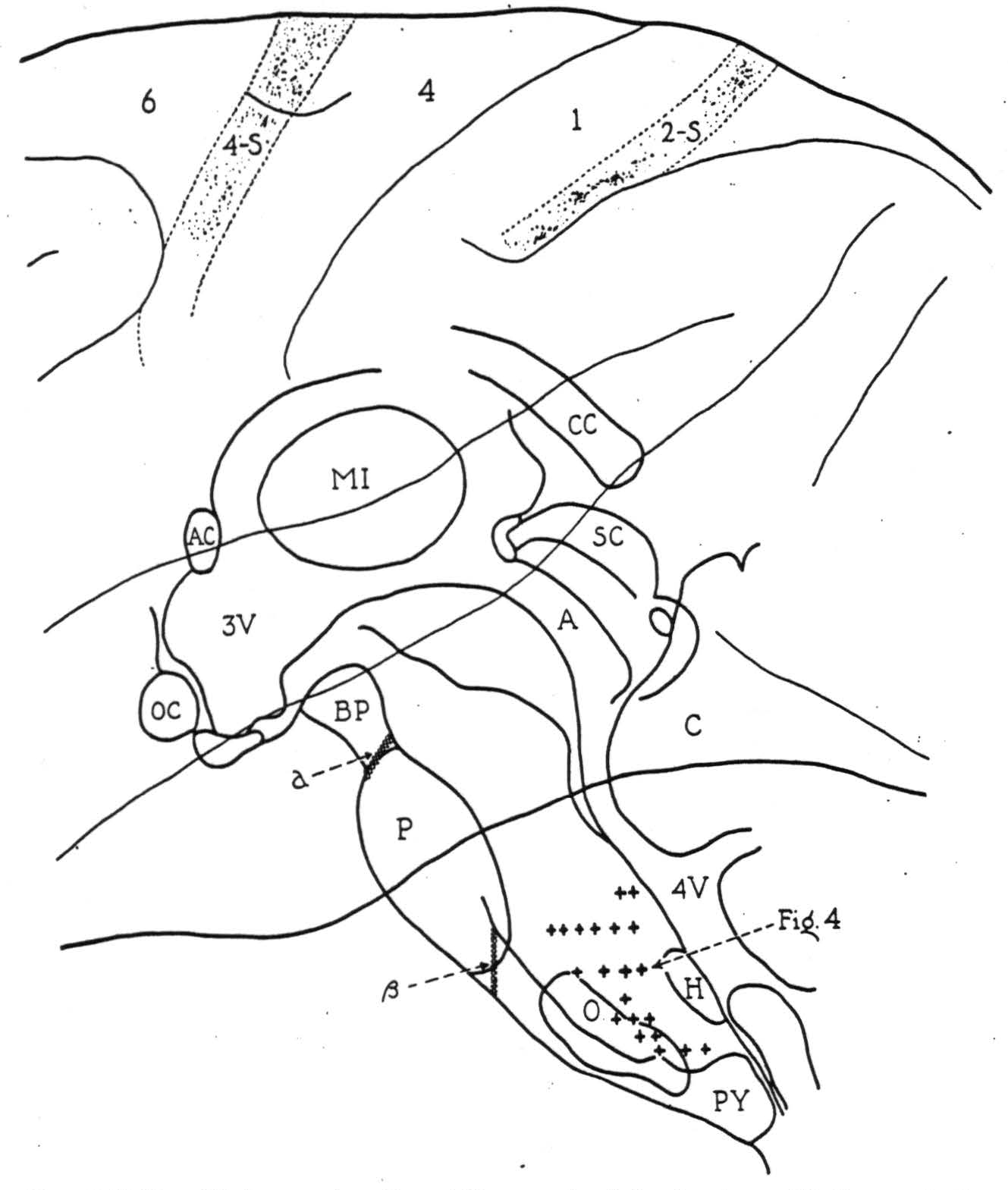 Figure 3. Midsagittal reconstruction of the monkey's brain stem with the cerebral cortex superimposed. Plus symbols indicate bulbar sites from which localizing potential changes were recorded following strychninization of cortical area 4-s. Symbol a indicates the lesion blocking, and symbol β, the lesion failing to block the cortico-bulbo-reticular projection.

here upon the midsagittal plane illustrates the distribution of axonal terminations from 4-s in the bulbar reticular formation.

All of these potential changes were recorded on activating area 4-s ipsilateral to the side explored and no clear evidence for descending connections from the opposite half of the cortex was obtained. Discharge at all these sites was recorded upon strychninizing the leg and arm divisions of area 4-s, and the lacuna marked by the hypoglossal nucleus (Fig. 3, H) adds further evidence that a cortico-bulbar projection from the face area of the cortex was not responsible for the results.

Relation of the cortico-bulbo-reticular pathway from 4-s to the pyramidal tract. Evidence as to the level at which the descending connections from area 4-s diverge from the cortico-spinal tract to reach the bulbar reticular formation was sought by repeating the experiments outlined above after acute section of the pyramid and basis pedunculi.

After interrupting the pyramid through a parapharyngeal approach and

Figure 4. Electrical records from cortex and bulbar site indicated in Fig. 3, on strychninization of cortical area 4-s after complete section of the pyramid immediately behind the pons (β, Fig. 3).

activating area 4-s, each cortical discharge evoked potential changes (Fig. 4) at the midbulbar site indicated in Fig. 3, which was about 5 mm. dorsocaudal to the lesion. Complete interruption of the pyramid was demonstrated in the course of the experiment by the absence of potentials from it on activating area 4, and subsequent microscopic examination showed the pyramid to be divided completely within and just behind the caudal part of the pons (β, Fig. 3).

In another animal, after subtemporal section of the left basis pedunculi, at the anterior border of the pons, which subsequent microscopic examination showed to be complete except for its most medial portion (a, Fig. 3), only initially negative potential changes, whose significance is uncertain, were recorded from the bulbar reticular formation on activating left area 4-s. Localizing potentials were recorded from homologous, right bulbar points on activating area 4-s on the right.

These results indicate that the descending connections from area 4-s to the bulbar reticular formation diverge from the cortico-spinal tract somewhere between the basis pedunculi and the pyramid, i.e., at the pontile level of the brain stem.

The results outlined above demonstrate a descending connection from cortical area 4-s that diverges from the cortico-spinal tract in the pons to reach and presumably end in the bulbar reticular formation. This pathway is evidently a direct one, for in the many situations in which the strychnine technique has been employed, it has never been observed to yield spike-like potentials past a synapse (12). The pathway may be unmyelinated below the pons for this was as far as Marchi-stained degeneration from area 4-s could be followed by Verhaart and Kennard (8). The presence of Marchi degeneration in the reticular formation after lesions of area 4-s has, however, been indicated in a table published by Hines (9). Whether this pathway is distributed entirely to the paramedian reticular region, as a literal interpretation of the present results indicates, or whether it scatters laterally from a paramedian concentration is uncertain.

Whether this cortico-bulbo-reticular pathway from area 4-s is the exclusive extrapyramidal system whose interruption yields spasticity requires further investigation. It arises in a cortical area whose stimulation induces relaxation and whose destruction, spasticity. It traverses a bulbar region whose stimulation inhibits motor activity.

By strychninizing the cortex and recording the electrical activity of the brain stem of the monkey, a pathway has been found to arise from area 4-s and diverge from the cortico-spinal tract in the pons to reach the bulbar reticular formation. From its known physiological properties this cortico-bulbo-reticular pathway is an extrapyramidal system mediating relaxation.