PHYSIOLOGICAL NEURONOGRAPHY OF SOME CORTICO-SUBCORTICAL CONNECTIONS IN THE CHIMPANZEE12 [62]

Heretofore anatomical evidence of any cortico-striatal connections has been meager. Bianchi and d'Abundo (1), although by Marchi methods they found no degenerated fibers following cortical lesions in dogs, noted a diminution in size of the corpus striatum, and concluded that there was a cortico-striatal projection. Marinesco (2), using similar techniques on apes and dogs, described a bundle of fibers passing from the frontal lobe to the nucleus caudatus. Dejerine (3) stated that in man there might be a few myelinated and possibly some nonmyelinated fibers passing from the cortex to the caudate, but that there was no significant cortico-caudatal projection. Wilson (4), C. and O. Vogt (5), Jakob (6), and Kodama (7) failed to discover any certain cortico-caudatal connections, whereas Hirasawa and Kato (8), following lesions by cautery in areas numbered by Vogt (9), α, β, γ and δ, and 9 c and d in several monkeys, on the basis of Marchi preparations, concluded that there was a cortico-striatal system to the nucleus caudatus, the putamen, and to both segments of the globus pallidus. Verhaart and Kennard (10) studied degenerations following discrete thermocoagulations of the cerebral cortex of monkeys, but failed to find any myelinated cortico-striatal projections, though they admitted that their findings would not exclude the possibility of nonmyelinated fibers. In contrast to the foregoing studies, which depended upon Marchi methods for detecting changes in myelin, the results by methods capable of revealing axons and their changes are comparatively conclusive. Ramón y Cajal (11), using methylene blue, found that from cortical projection fibers there emerged collaterals which terminated in the nucleus caudatus of mouse and rabbit, and perhaps cat and man. Recently, Glees (12), using an improved silver method, has found cortico-caudatal connections arising from areas of the cat's cortex which have been shown to yield suppression (9). Following the unilateral destruction of these areas, there appeared numerous degenerated, nonmyelinated collaterals streaming from the internal capsule into the nucleus caudatus on the homolateral side.

The present study was conducted during investigation of the functional organization of the cerebral cortex in the chimpanzee (13), by the method of physiological neuronography previously applied to the cortex of the monkey (14). The results are necessarily incomplete but, since a thorough investigation is not apt to be undertaken in the near future, it is thought advisable to record them at this time. The observations were intended to be of the cortico-striatal connections but, by accident, three electrodes were placed in thalamic nuclei and the results obtained with these electrodes are included here.

Seven animals were investigated. Under anesthesia with Dial,3 0.45 cc. per kg. (one-half intramuscularly and one-half intraperitoneally), the hemisphere was widely exposed, and concentric shielded and insulated intracerebral electrodes were manually inserted toward the basal ganglia. A variable number of stigmatic silver-silver chloride electrodes were placed on the pia-arachnoid membrane covering the cerebral cortex. One pair of electrodes was placed at the site of local strychninization and the electrical activity of this pair (the rover) was recorded in one channel of the six Grass ink-writing oscillographs. The other electrodes were arranged for bipolar recording.

Photographs and drawings were made of each brain upon surgical exposure and again after the pia-arachnoid membrane was removed from the fixed brain. The site of each cortical electrode and of each strychninization was recorded on enlarged photographs during the course of the experiment.

Before removing an intracerebral electrode, a small lesion was made at its tip with the Goodwin electrocoagulator. After perfusion with a 4 per cent solution of formaldehyde in normal saline, the brain was placed in a 4 per cent solution of formaldehyde in distilled water and sectioned macroscopically on the following day (15). The site of each electrode was plotted and compared with our standard Weigert serial sections of the chimpanzee's brain.

The technique of local strychninization, electrical recording and mode of analysis has been adequately presented previously (16). Only the typical “strychnine-spike,” approximately synchronous at the site of strychninization and at remote parts, was considered evidence of a direct neural connection between them. It is known to reveal disturbances propagated in the normal direction from cell bodies in the area strychninized to regions reached by their axons or axonal collaterals.

There were 222 local applications of strychnine to the cerebral cortex, and 33 satisfactory electrode-placements in a total of 60 trials. Of the electrodes which missed the basal ganglia, one was found later to lie in the ventrolateral nucleus of the thalamus and two others in the pulvinar.

Of the 1280 possible intracerebral “spikings,” only 109 were positive. Table I shows the results on each animal in the series. No spiking was found in chimpanzee V, because all seven applications of strychnine were in the parietal region. At no time did the parietal region posterior to the postcentral sulcus “fire” into the nucleus caudatus, the putamen, or the globus pallidus.

may have been missed, since the records were not run continuously. It seems best to suppose that these strychninizations lay at the anterior margin of band IV and of band VIII. 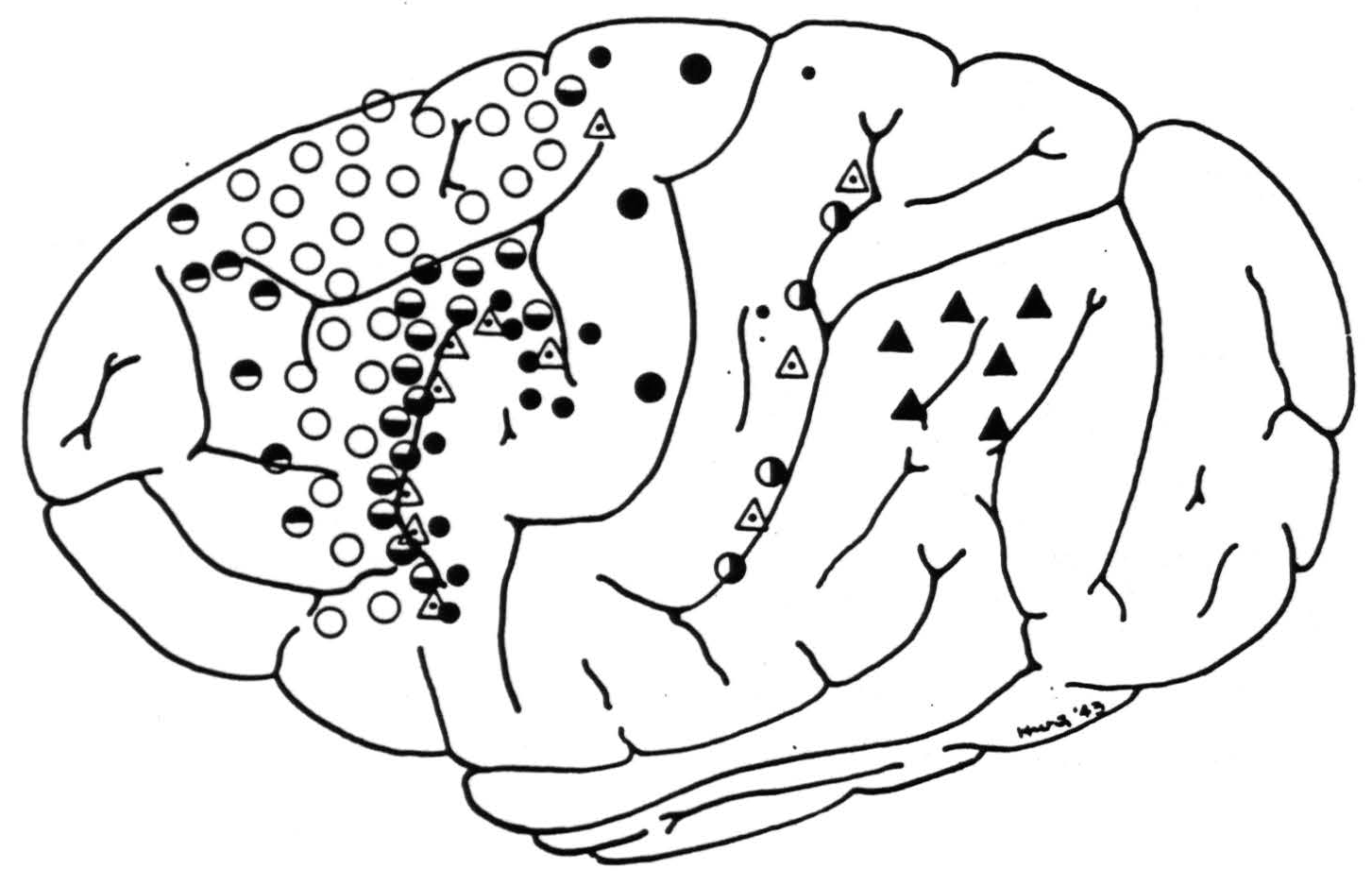 Figure 2 shows the site of each intracerebral electrode in the appropriate nucleus. The symbol indicates the portion of the cortex whose strychninization caused firing at the electrode in question.

The records obtained are not illustrated because they were entirely similar to those already published from experiments on Macaco mulatta (14). 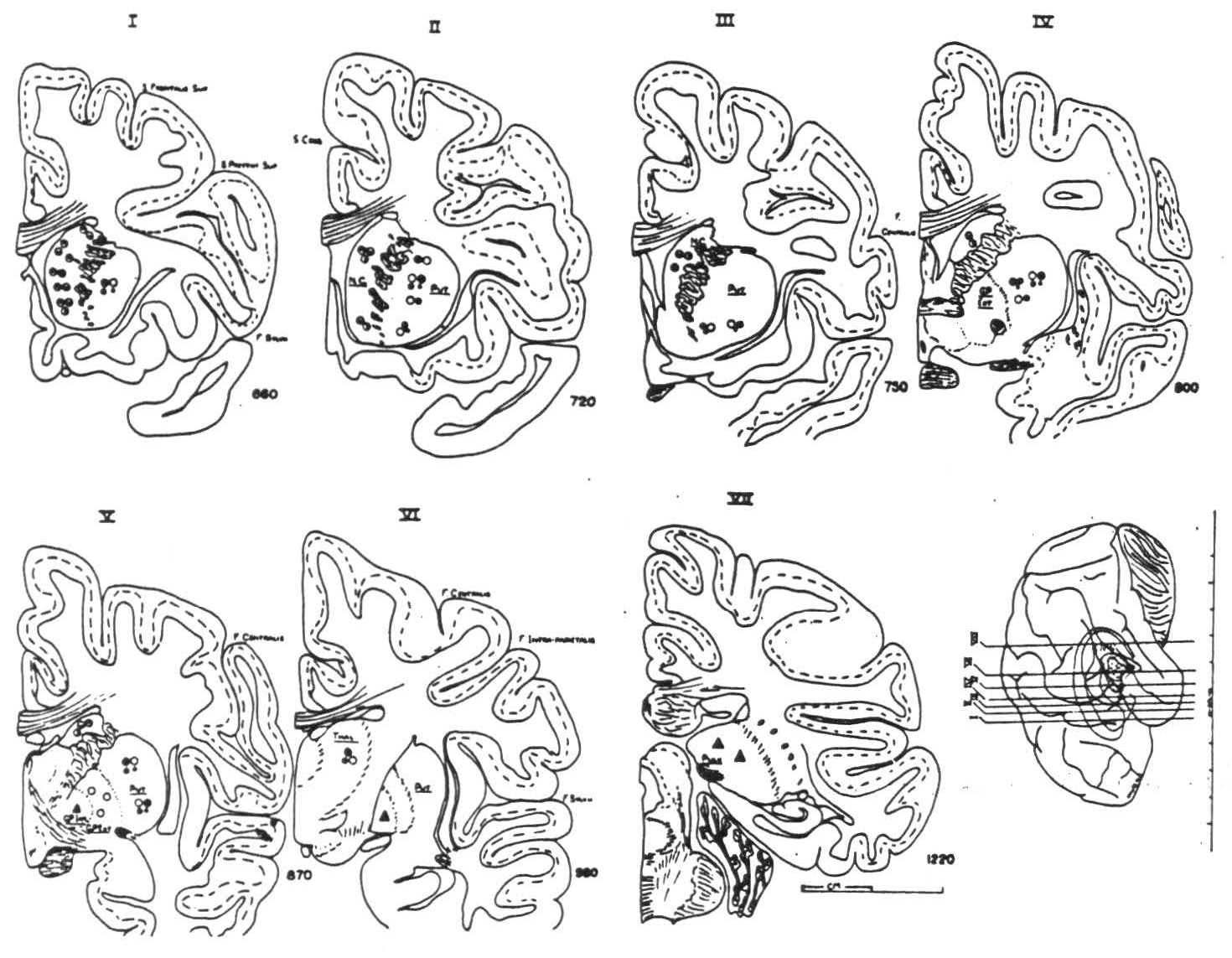 Figure 2. Frontal sections through the basal ganglia showing location of the intracerebral electrodes fired by the cortical strychninizations indicated in Fig. 1. Symbols are the same: half-filled circles indicate projections to nucleus caudatus from bands I, III and VII; empty circles, from band II to putamen and globus pallidus extemus; large solid circles, from band V, medium-sized from band IV to putamen; small solid circles, projection to putamen from band VI; dotted triangles, to globus pallidus internus from junctions of bands III and IV and of bands VII and VIII; solid triangles, projection from bands IX and X to pulvinar.

In the monkey's brain, where the nuclear masses are relatively small, strychninization of any part of the arm subdivision of the sensory cortex fires all parts of the lateral thalamic nucleus for arm; whereas in our chimpanzee XV an electrode in the lateral thalamic nucleus for arm was fired only from the precentral portion of the arm-subdivision of the central sector, not even from the immediate postcentral region. An electrode in the pulvinar in chimpanzee XXVI was fired from bands IX and X, which are presumably homologous with areas 40 and 39 in man, but not by any strychninization anterior to them.3

On the other hand in the chimpanzee, as in the monkey, there was no evidence to indicate any somatotopic representation (17) in the corpus striatum. This makes it possible to schematize the recorded cortico-striatal 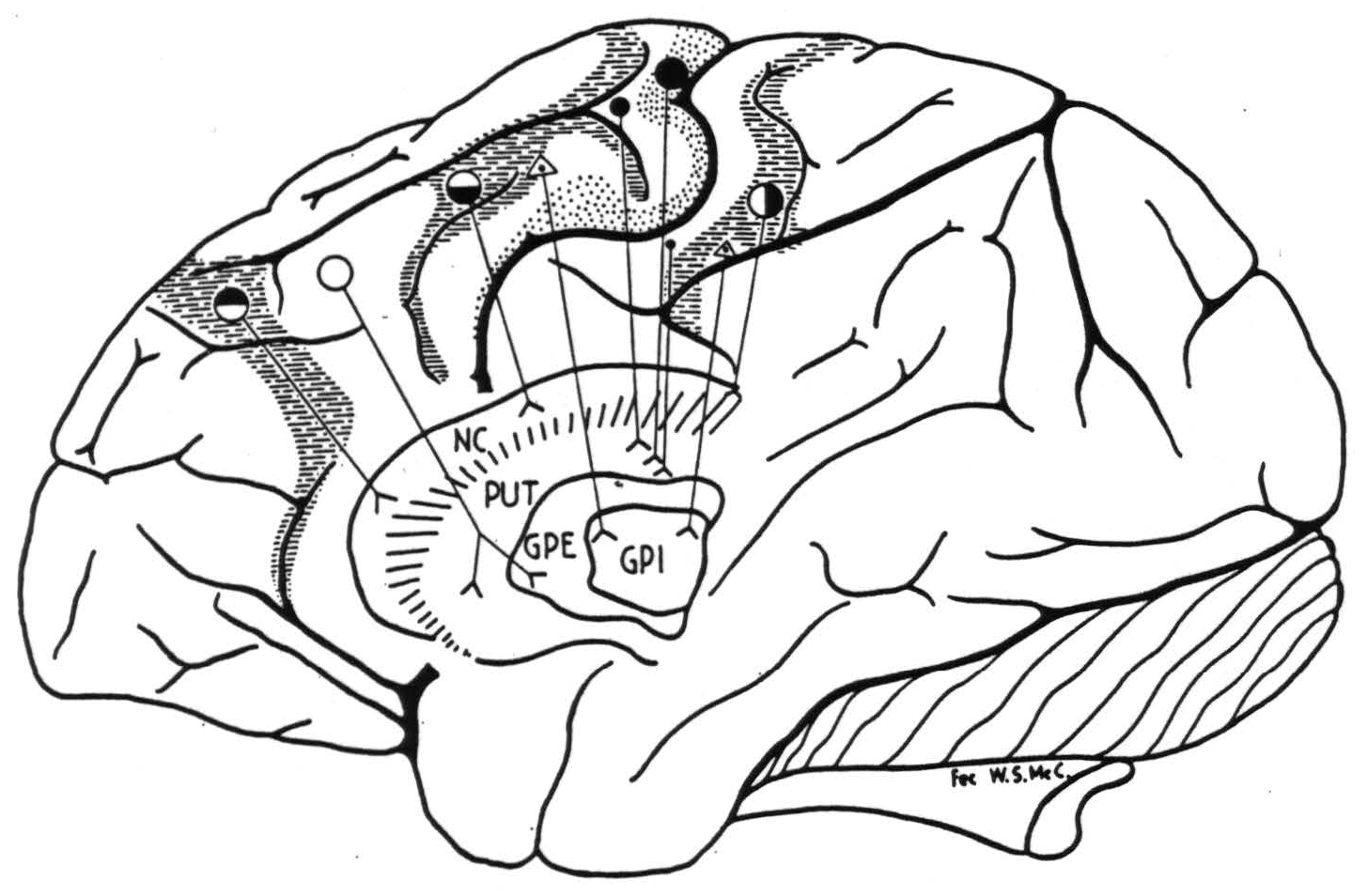 connections simply as in Fig. 3; the connections from area 24 to the nucleus caudatus could not be shown on this lateral view of the hemisphere.

The projection to the globus pallidus internus has not been found in the Macaca mulatta (14).

The method of physiological neuronography has demonstrated the following in the chimpanzee:

1 We wish to thank Ciba for placing the Dial at our disposal. ↩
2 Aided by a grant from the John and Mary R. Markle Foundation. ↩
3 This cortico-pulvinar connection has recently been found also in Macaca mulatto by P. Bailey and G. von Bonin. ↩ ↩