The method presented was developed during studies of action potentials from the nervous system. It gives photokymographic records of the cathode ray oscillogram, black, and other signals, white, on a gray background with coordinates of time and amplitude.

These have been obtained (4/10 actual size) on bromide paper moving vertically in a recording camera, fitted with a photographic lens of large aperture (F/1.2-5 cm focal length), set (11.5 cm) in front of the screen of the cathode ray oscillograph. On this the fluorescent spot moves horizontally in response to potentials impressed on the corresponding plates.

In the same focal plane tangent to the screen, just below the spot, is mounted a flat, horizontal strip of white, unglazed paper, illuminated by a washlight to give the gray background and ruled vertically every centimeter to give the amplitude scale. To illuminate this strip, light from a small intense source is focused to a point where it is periodically interrupted by a timing device; then its divergence is reduced by a lens, and the beam reflected by a plane mirror through a cylindrical lens (5 inches long, 4 inches focal length), thus producing a bright band on the upper edge of the strip.

To record stimulus, response and other variables electromagnets, tambours or other devices interrupt the washlight by 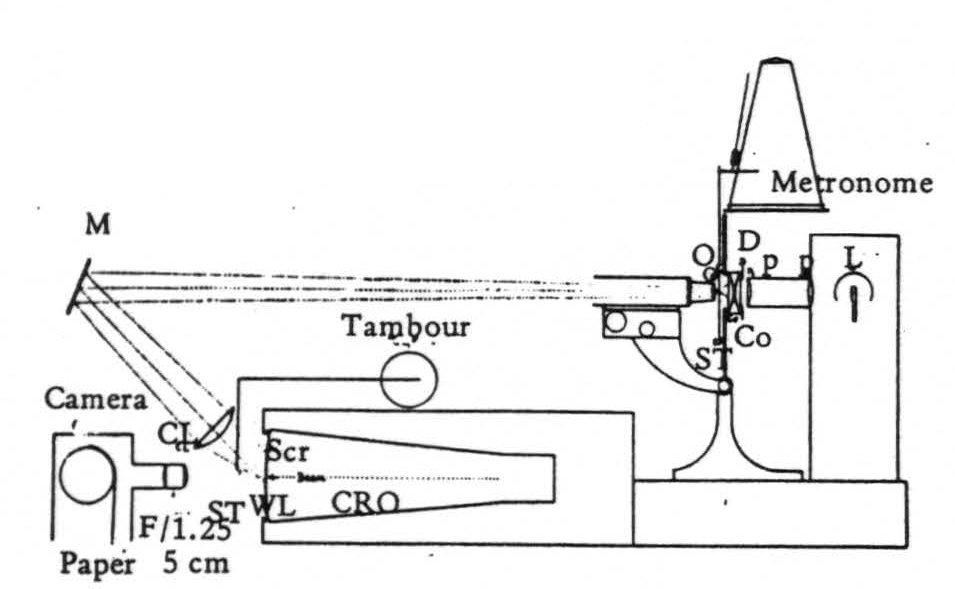 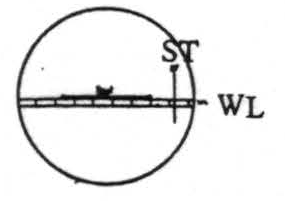 their vertical stylets, which travel horizontally between the cylindrical lens and the illuminated strip.

As the screen and the strip of paper are photographed simultaneously to produce the records described, the spot, being just above the strip, is recorded, at any speed of paper, a small constant distance (about .55 mm) ahead of the corresponding shadow record.

In practice a small projection lantern has proved a satisfactory source of washlight for records of speeds up to 4 inches per second. Its collimated beam is focused by the condenser of a microscope, in horizontal position, to a point between its stage and low power objective, which reduces the divergence of the beam. The intensity of the light is controlled by the diaphragm of the condenser, and inequalities in illumination of the strip of paper are reduced by a cardboard shield, cut to admit less light in the center and mounted against the cylindrical lens. In order to avoid possible electrical interference from synchronous motors used to drive tooth-wheel interrupters, the time record was obtained from a metronome, with a descending arm so placed that at the center of the swing it interrupts the beam at its focal point between the stage and objective of the microscope.

When necessary, simultaneous tracings (in black) from instruments with mirrors on moving elements can be superimposed upon these records by focusing the beam from the mirror to a spot, which moves horizontally on the strip.