FUNCTIONAL ORGANIZATION OF THE MEDIAL ASPECT OF THE PRIMATE CORTEX1 [56]

The medial surface of the cerebral cortex in various primates has been mapped cytoarchitectonically by Campbell (1), Brodmann (2), Vogt (3), and von Economo and Koskinas (4), and myeloarchitectonically by Mauss (5, 6). Marchi and retrograde degeneration studies (7, 8) of intercortical or thalamocortical connections have not been done extensively on this portion of the cerebrum.

The functional organization of the medial aspect of the cerebral hemisphere was investigated by the method of physiological neuronography in 3 macaques (Macaca mulatta) and 4 chimpanzees (Pan satyrus), all under Dial2 anaesthesia. In order to expose the medial surface, the cerebral hemisphere was widely exposed, the veins of the pia mater emptying into the superior longitudinal sinus were coagulated and severed. After these preliminary operations it was possible to expose the medial side by putting the animal, which was firmly tied to a board, on its side, and allowing the brain to sag out. In one macaque and one chimpanzee both hemispheres were exposed in order to explore the commissural connections. In two other macaques the corpus callosum was transected and the anterior tubercle of the thalamus exposed in order to investigate the corticothalamic connections. The technique of physiological neuronography has been described so frequently in this journal (10, 11) that it seems unnecessary to repeat the details.

The following areas could be identified in both the macaque and chimpanzee on or adjacent to the cingular gyrus: 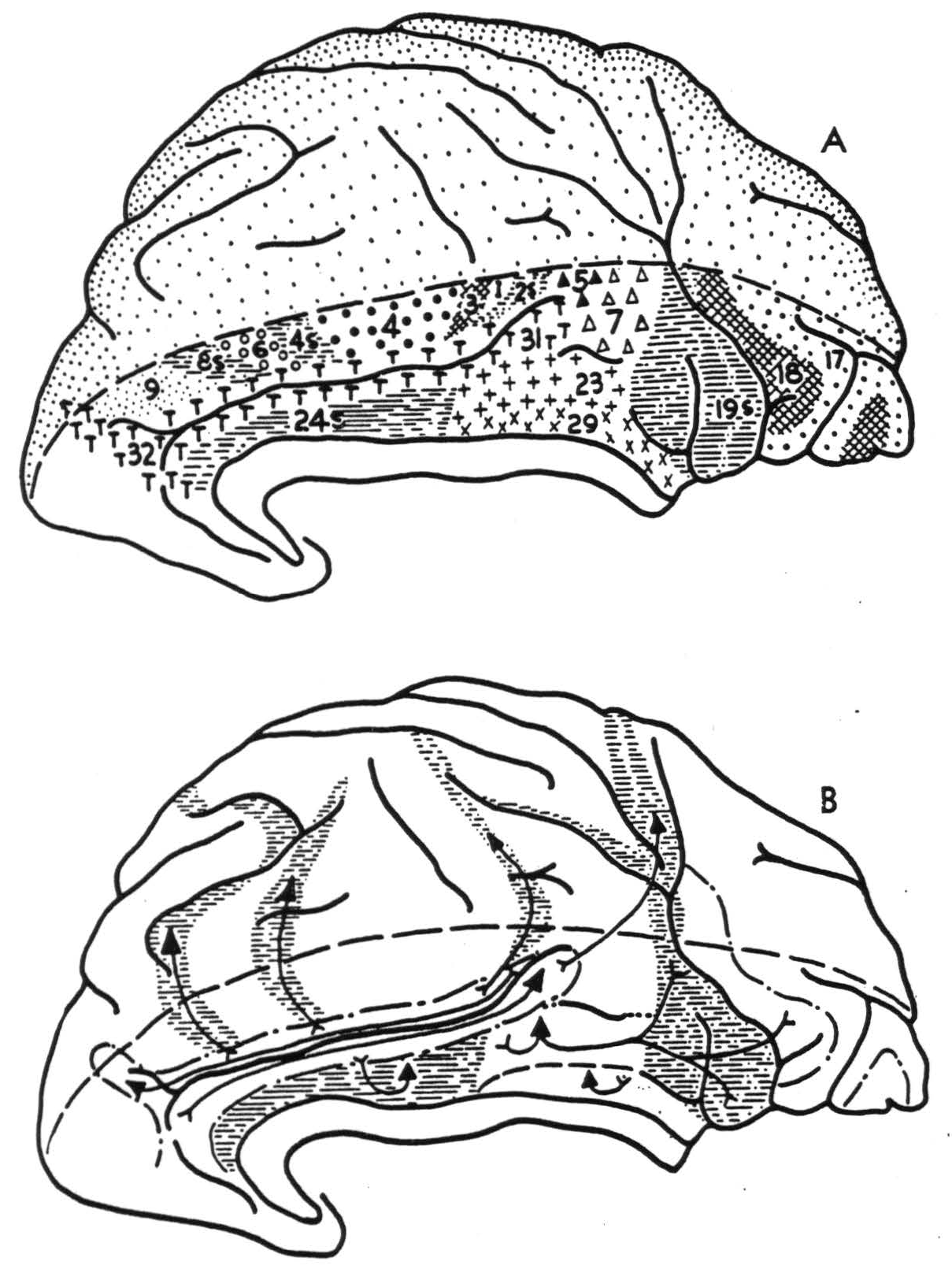 Figure 1. Hemisphere of Macaca mulatta, showing (A) physiologically distinguishable areas and (B) their interareal connections.

Certain areas, identifiable on the medial surface of the frontal lobe of the chimpanzee but not of the macaque, will be mentioned in the discussion.

It is not easy to homologize all the areas just defined by their cortico-cortical connections with those previously defined by their cytoarchitectural structure. The suppressor area in the rostral part of the gyrus cinguli, defined under 1, is readily identified with Brodmann's area 24, Rose's mesocortex (12) and v. Economo and Koskinas' area LA. The postero-dorsal cingular area described under 2 is identifiable as Brodmann's area 23, or v. Economo and Koskinas' LB. Similarly, the area of local firing close to the splenium of the corpus callosum, defined under 3, is undoubtedly one of the retrosplenial formations recognizable by their cytoarchitecture. It is impossible to say which of the three or four small areas described in that part of the primate brain is actually responsible for the phenomena observed, as each is too small to allow accurate topical strychninization. In lower forms, e.g. in the bat, where this part of the brain is much better developed, it is area 29 which forms the major portion of this region. In the primate brain, therefore, we shall allude to this area of restricted firing as area 29. It is difficult to identify the “cingular belt” on cytoarchitectural maps. All students of cytoarchitecture agree that its anterior part is “agranular” while its posterior part shows a well developed internal granular layer. The anterior part of the belt may be area 32, the posterior part area 31 as described by Brodmann in the human brain. The ventral boundary of the “belt” is more dorsal than that of Brodmann's area 31. Brodmann's map of the macaque bears little resemblance to our findings. In the brain of the cercopithecus, Mauss (5) described myeloarchitecturally a belt-like area 31 which occupies a position very similar to that of the cingular belt described here. That area 32 shows commissural connections, while area 31 does not, may be correlated with the difference in cytoarchitectural structure. Yet the two areas have the same ipsilateral cortical connection. All known suppressor areas fire into them, and together they may provide an important parieto-frontal and fronto-parietal pathway.

It is clear from our findings that the gyrus cinguli may be divided into at least three parts. Area 24 forms the anterior cingular region, for which in primates no thalamic radiations have been demonstrated. In rodents it receives them from the anteromedial thalamic nucleus (13, 14). In the macaque areas 29 and 23 form a posterior cingular sector from which there is a projection to the anterior thalamic nucleus. Areas 31 and 32 form a superior cingular region; it is impossible at present to define it in terms of cortico-thalamic connections. Although the “cingular belt” receives impulses from all suppressor areas, obviously areas 32 and 31 are not responsible for suppression, for strychninization of these areas does not lead to suppression of spontaneous cortical electrical activity, nor does electrical stimulation of them lead to suppression of motor response.

In the chimpanzee, at the tip of the medial surface of the frontal lobe we have distinguished, ventral and anterior to area 32, an area which fires area 32 but is not fired by it; this rostral area may correspond to Brodmann's area 10 in man. The suppressor area (24) extends around anterior and ventral to the genu of the corpus callosum. Just in front of the lamina terminalis is an area which we have not been able to expose well enough to determine its firing characteristics; here Brodmann locates his area 25 in man. Along the ventral margin of the medial surface of the human frontal lobe lies Brodmann's area 11; this region, in the chimpanzee, fires only locally but is fired by areas 21 and 22 of the temporal lobe. This leaves a central region, which has only been found to fire locally and corresponds to Brodmann's area 12 in man. Of all these areas, only area 10 fires across to the opposite hemisphere. We have not been able to distinguish these areas in the macaque.

Areas on the medial surface of the frontal lobe of the chimpanzee, which may correspond to Brodmann's areas 10, 11 and 12, have been identified and their firing characteristics determined. These were not identified in the macaque.