Prior to 1933 the popular explanation of the onset of convulsions was in terms of spasm of the cerebral blood vessels. This was supposed to account for the commonest pathological findings, all of which could be interpreted as anoxic changes. Work done at Yale by Stone, Marshall and Nims(1) had indicated that reduced oxygen supply resulted in the production of lactic acid, and recently Stone, Webster and Derbyshire(2) have found that in induced convulsions the lactic acid content of the brain may be increased as much as seven-fold. Hence there was reason to believe that anoxia occurred during convulsions.

On the other hand, since 1933 all attempts to detect diminution in cerebral circulation have shown no initial change and a subsequent increase. One hypothesis would reconcile these findings—namely, a relative anoxia due to an increased demand by the excited cortex. Thanks to Drs. Bronk, Brink, Davies and Milliken(3), methods have been established for the measurement of the oxygen tension of the cerebral cortex. For the present purposes, their electrode, whose calibration is more meaningful than that here employed, could not be used to follow rapid changes, and recourse was had to the oldest form of polarography, as originally performed by E. Salomon(4) in 1897 and 1898. His procedure was to plot the current flowing through the unknown between a negative platinum point and a large non-polarizable electrode. When the current is plotted as a function of the voltage, there appear a series of plateaux, the lowest of which is determined by a reaction in which 2 H++02+2 electrons go to H2O2. So long as the voltage applied is that corresponding to the plateau, the current measures the oxygen tension. Since the calibration of such an instrument can be performed only in stirred solutions of known oxygen pressures, and the brain is not, properly speaking, a stirred solution but depends upon diffusion to maintain its oxygen tension, it was thought best not to attempt to state the observed oxygen tensions in terms of pressures 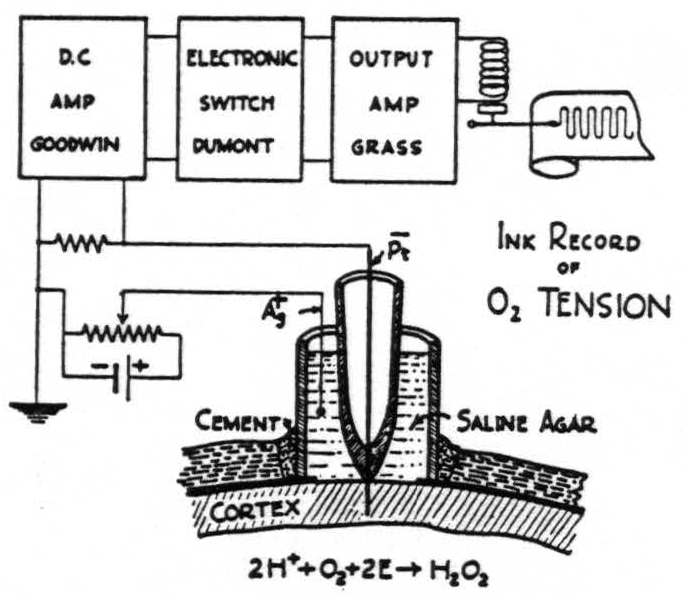 but only in terms of changes from the observed normal of the cortex studied. Therefore the findings are reported in arbitrary units of such a size that o represents the resting oxygen tension of the brain, and —20 to —30 represents the oxygen tension when the animal is drowned for upwards of two minutes in nitrogen.

Fig. I shows the typical setup of the apparatus. In brief, it is as follows: A platinum point is sealed through the end of a small glass tube which is then imbedded in saline agar containing an Ag-AgCl electrode having a large surface, and the whole is surrounded by a glass tube circa ⅜” in external diameter. The skull is trephined, the dura incised and reflected. The electrodes are then inserted through the trephine opening so that the platinum point pierces the thickness of the cortex and the agar wick rests on its surface. The crack between the skull and the glass tube is filled with wax, and the entire joint is then sealed with collodion. 0.9 of a volt is applied from a potentiometer and through a series resistance of 1 megohm. The voltage drop across this resistor is picked up with a Goodwin D-C amplifier, output to an electronic switch which serves as a chopper and which, in turn, activates the output stage of a Grass ink writing oscillograph. Thus the envelope of the resulting trace measures the change of the oxygen tension from its normal value.

All records were obtained from animals previously operated upon under full anesthesia with ether or nembutal, but no tracings were made until hours after anesthesia had ceased. The animal was placed in a comfortable position upon a board. Two electrodes for electroencephalogram and two for electrocardiogram were attached. In some of the later experiments the blood pressure was recorded from the femoral artery. In these cases the blood was rendered non-coagulable with chlorazol fast pink (1 cc. of a 5 per cent solution per kilo), which has previously been shown not to influence any of the parameters under investigation. Complete paralysis was obtained with beta erythroidine hydrobromide, 5 mgm. per kilo of body weight, intravenously. Artificial respiration was always established at 50 cc. per stroke and 30 strokes a minute from a Starling Ideal respirator pump.

When all was in readiness, the animal was caused to breathe first pure nitrogen until the brain waves had disappeared, and thereafter either pure oxygen or a mixture of 5 per cent or 10 per cent carbon dioxide in pure oxygen. In both cases the alteration in the current was recorded, thus roughly calibrating the sensitivity of the oxygen tension recorder.

When the apparatus had been so checked, a convulsion was induced either electrically or by administration of some drug intravenously. Whether induced by electrical stimulation or by aminophylline, caffeine, coramine, metrazol, strychnine or picrotoxin, the seizure was always accompanied by a marked fall in oxygen tension(5). Initial seizures produced by any of these drugs regularly showed the fall in oxygen tension beginning several seconds before the first electrical sign in the cortex and reaching its nadir about half a minute after the last large potential of the seizure. With most of these drugs the fall amounted to more than one-third and sometimes to as much as three-fourths of the total fall in oxygen tension that could be produced by drowning the animal in nitrogen. When, due to repeated doses of convulsants or slow injections, status epilepticus developed, so long as the seizures were sufficiently separated in time, the findings were essentially similar. It was only when the seizures followed each other in quick succession than any confusion occurred. What seems to happen when seizures are nearer together than one minute is that the rise in oxygen tension following the previous seizure is not counteracted by the fall due to the oncoming seizure until after this seizure is well under way (see Fig. 5). Thus in understanding the oxygen tension we must look only to the initial seizures or those in which the seizures are widely separated.

The experiments of Gibbs(6), Gibbs, Lennox and Gibbs(7), Penfield, von Sántha, and Cipriani(8), and Jasper and Erickson(9) have shown that there is no change in the circulation of the brain prior to or during the initiation of an induced seizure, and that there is a definite increase in circulation thereafter. It seems obvious, then, that the fall in oxygen tension occurs not only prior to the onset of the electrical seizure, but also long prior to any change in circulation, and that the only change in circulation observed is an increase which would cause a rise in oxygen tension. Hence the initial fall in oxygen tension must indicate a rise in the oxygen consumption by the brain even before it reaches such hyperexcitability as to break into a spontaneous seizure.

Fig. 2 represents these findings. The upper tracing is the electroencephalogram, the second, the electrocardiogram, and the third is the envelope indicating oxygen tension. The seizure has been induced with metrazol. The oxygen tension begins to fall considerably before there is any evidence of electrical activity in the cortex and begins to rise after the activity has subsided. There has been no change in the blood pressure during this seizure.

With all of this in mind, it is possible to take up the convulsant action of the sulfa drugs which are now in current use. This work was begun at the suggestion of Dr. Jasper, who merely wished to add to his own 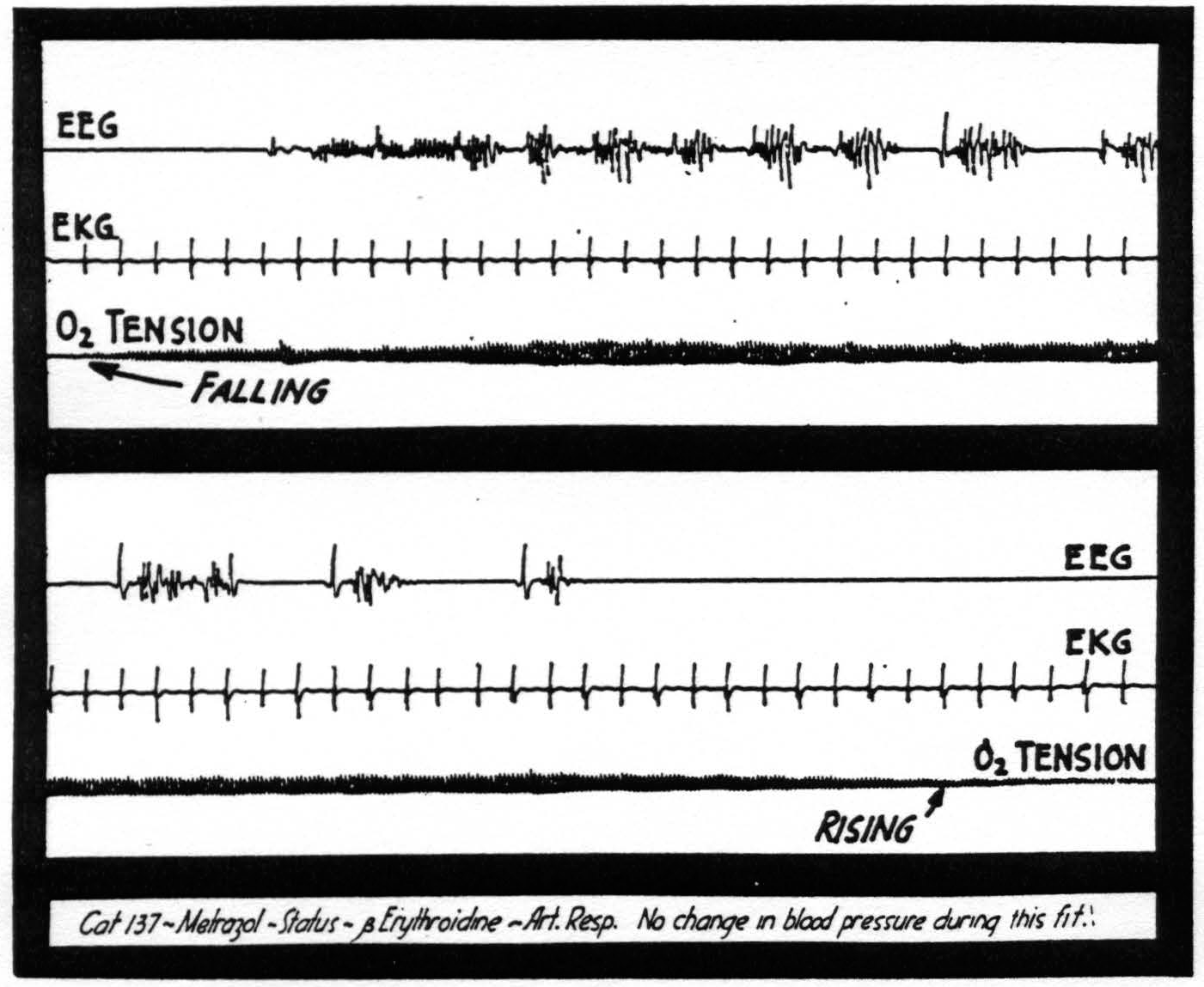 Figure 2. Note the fall in oxygen tension beginning before the electrical manifestations of the seizure.

knowledge of their convulsant action by studies of the oxygen tension.

Sulfanilamide and sulfadiazine given intravenously in large doses did not cause seizures and nothing further need be said about them. The effects of sulfathiazole and sulfapyridine can best be demonstrated by figures. Fig. 3 shows at the extreme left the calibration of the oxygen tension electrode system in situ, first with respiration of pure N2 with a fall to —26; next with 10 per cent CO2 in O2 and a rise to +40— both expressed in arbitrary units. The injection of sodium sulfathiazole causes an almost immediate drop in the oxygen tension and a decrease in heart rate. Abnormal brain waves appear at a blood level of circa 150 mgm. per cent. Seizures occur at a blood level of circa 390 mgm. per cent. The onset of the seizure causes the oxygen tension to drop to or below the level obtained with pure nitrogen. The animal passes rapidly into status epilepticus and finally dies of cardiac failure. 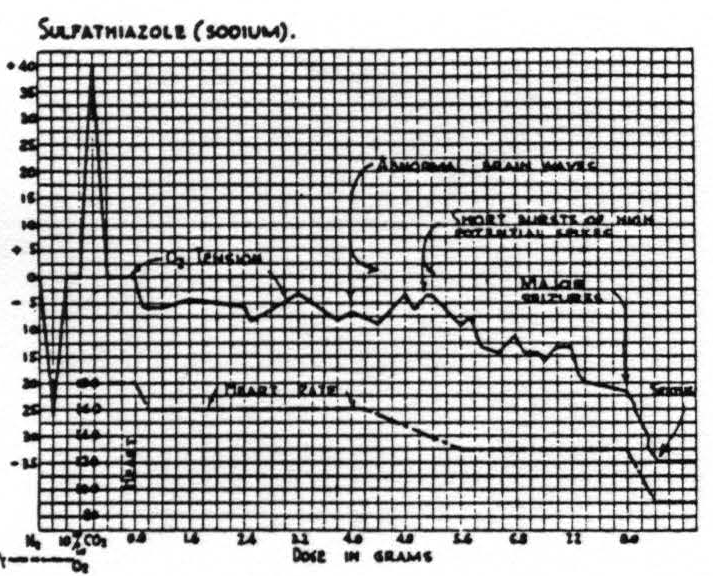 Figure 3. Cat No. 119. Animal paralyzed with erythroidine and under artificial respiration at 50 cc. per stroke and 30 strokes per minute. Respiration of pure N2 gives downward deflection and 10 per cent CO2 in O2 gives upward deflection. No significant fall in oxygen tension until the onset of high potential spikes in the electroencephalogram. 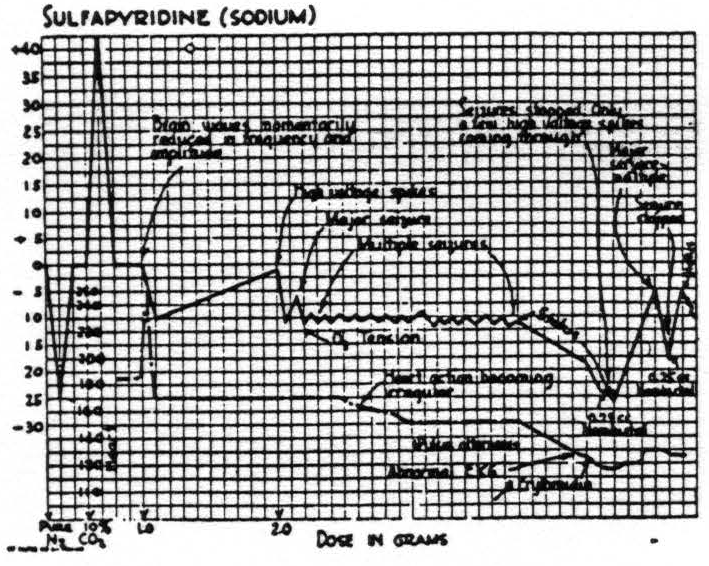 Figure 4. Cat No. 122. Procedure similar to that in cat No. 119 (Fig. 3) . The oxygen tension drops abruptly at the onset of high potential spikes and falls rapidly during status. There is a rapid rise in oxygen tension associated with the cessation of the seizures following intravenous nembutal. 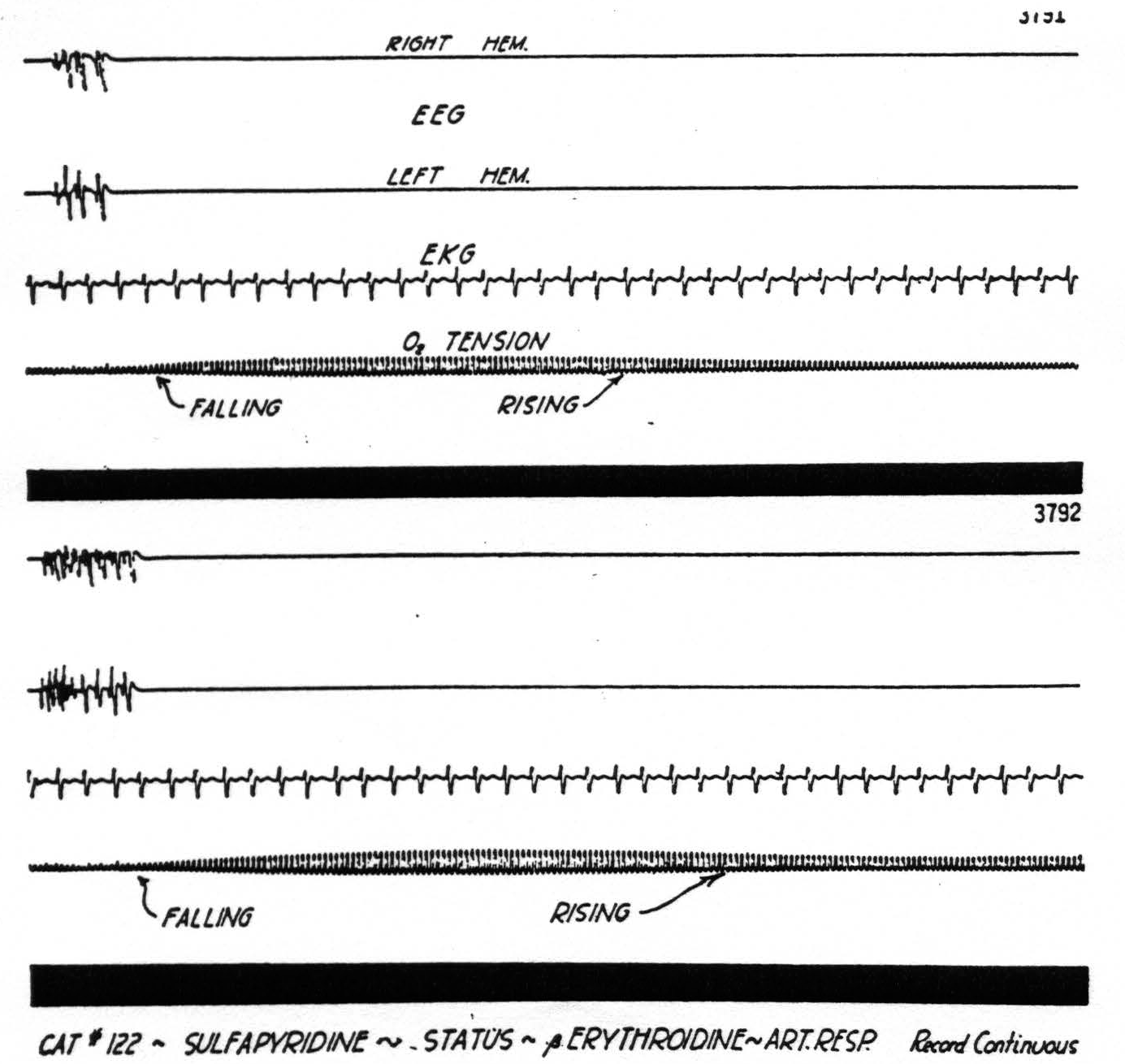 tension followed by an immediate rise associated with the cessation of cortical activity.

The onset of seizures induced with sulfathiazole and sulfapyridine does not cause a preseizure fall in oxygen tension similar to that seen with most other convulsant drugs. In each case, however, there is a long period preceding the seizure in which the cortical activity is increased and the oxygen tension gradually drops. Undoubtedly part of the drop in oxygen tension can be explained by the effect of the drugs on the cardiovascular system, and a fall in blood pressure, but there remains the abrupt drop at the onset of each seizure which must be attributed to the events taking place in the cortex. How small a burst of activity can cause a change in oxygen tension is shown in Fig. 5. This is a record from an animal in status epilepticus induced with sulfapyridine. The oxygen tension is lowered by each burst of cortical activity and gradually rises until another burst lowers it again.

A relative anoxia of the cerebral cortex occurs before, during and after convulsions induced electrically or by a variety of drugs. This relative anoxia is believed to be caused by increased cerebral metabolism.

From the Illinois Neuropsychiatric Institute, University of Illinois College of Medicine.

Roseman, E., and McCulloch, W. S. Rapid changes in the oxygen tension of the cortex. (Papers to be published.)

1 Read at the ninety-ninth annual meeting of the American Psychiatric Association, Section on Convulsive Disorders, Detroit, Michigan, May 10-13, 1943. ↩