LONG ASSOCIATION FIBERS IN CEREBRAL HEMISPHERES OF MONKEY AND CHIMPANZEE12 [54]

During experiments on the functional organization of the cerebral cortex in the monkey and chimpanzee, as well as during studies on its projection systems, attempts were constantly made to prove physiologically the existence of those long association tracts joining remote regions of the cerebral hemispheres which have been described in the human brain. Several have been found but, as they belong in no case to any one of the anatomical or functional subdivisions of the hemisphere, it was thought best to report them in a separate article. The long callosal fibers have already been described (1) and will not be herein mentioned, except for the interhemispheric connections of area 18.

The method of physiological neuronography has been explained in previous articles (2). All experiments were performed under full Dial anesthesia, with the brain exceptionally widely exposed and with the pia mater and cerebral blood supply and drainage as nearly intact as possible. Electrodes were placed, sometimes at one site and sometimes at another, so that practically all parts, excepting the most medial portion of the inferior surface behind the temporal lobe, had been examined by the end of the experiments. The same procedure was followed with respect to strychninization. This was in each case performed by application of a few square millimeters of filter paper moistened with a saturated solution of strychnine sulphate. The activity was recorded before and after the strychninization. Photographs were made and the positions of electrodes and strychnine recorded on these. After sacrificing the animal the brain was peeled, rephotographed and studied to determine as precisely as possible the sites of electrodes and strychnine and thus to prepare the composite diagrams presented below.

The experiments disclosed the existence of three long fiber tracts, originating and terminating on the convex surface of the hemisphere: (i) in the chimpanzee, strychninization of the posterior margin of band I, which by stimulation was proved to be the eye field (area 8 of Brodmann) produces well-defined strychnine spikes propagated to area 18 of the same hemisphere, and also to the corresponding area of the opposite hemisphere (3). By partial strychninization of the ipsilateral area 18 during this strychninization of band I, it was possible to obtain a relaying of the disturbance of the ipsilateral area 18 to the contralateral. The time of this relayed spike is such that it follows the direct spike by more than an entire spike duration—that is, by more than 50 msec. (Fig. 1). This is considered worth reporting because of the strength of the commissural connections between 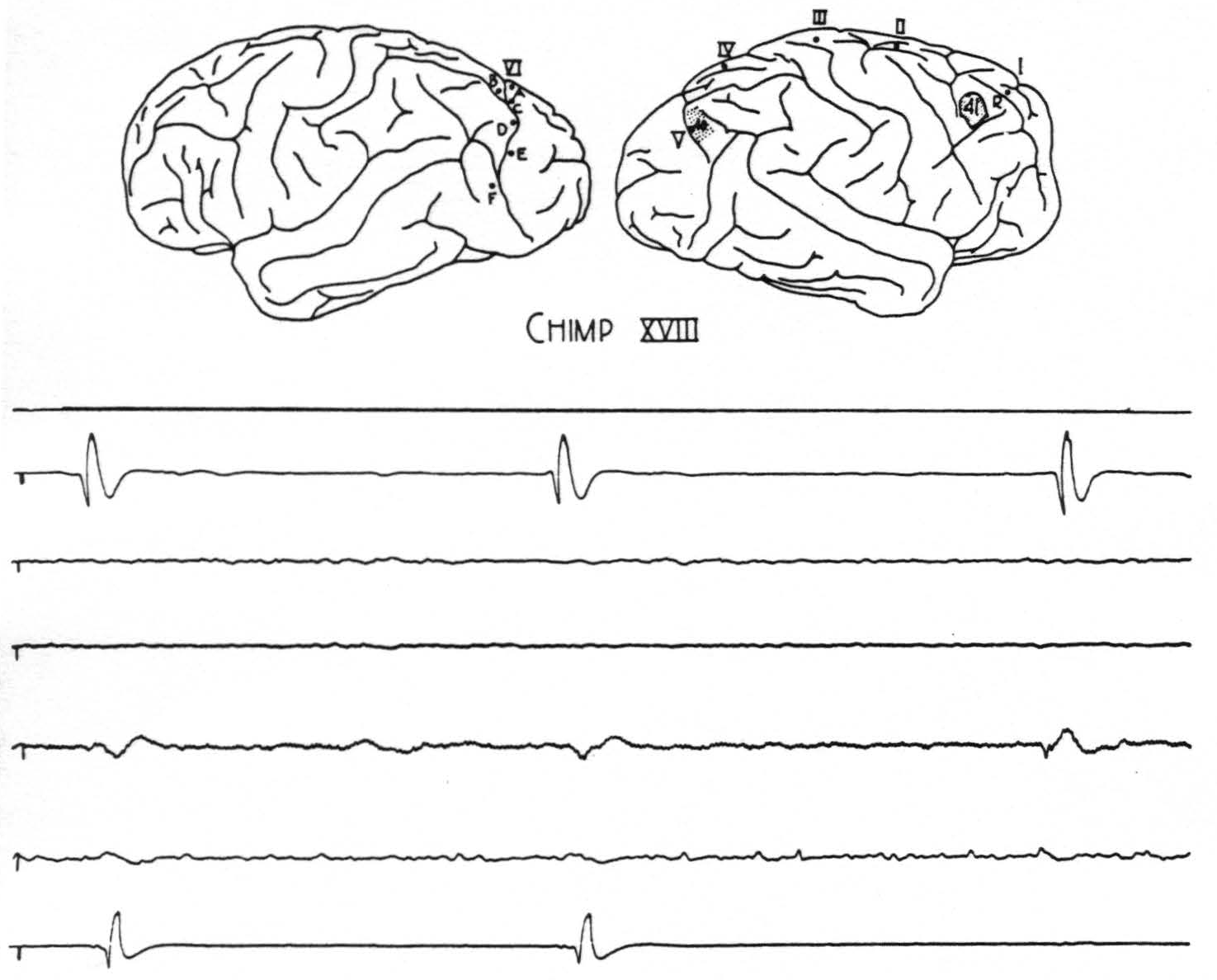 the area 18. (ii) Strychninization anywhere in area 18, whether on the medial, lateral or inferior surface of the hemisphere, results in strychnine spikes propagated to some part of the inferior temporal convolution (area 20) (4). In general, those from the more inferior portion of area 18 are propagated further toward the tip of the temporal lobe. On several occasions this disturbance was found to extend just onto the central portion of the upper lip of the second temporal sulcus; but at no time could these disturbances be traced to the extreme tip of the temporal lobe, either in the monkey or in the chimpanzee. Figure 2 exemplifies these findings. (iii) Strychninization of the area orbitalis agranularis (area 47 of Brodmann or 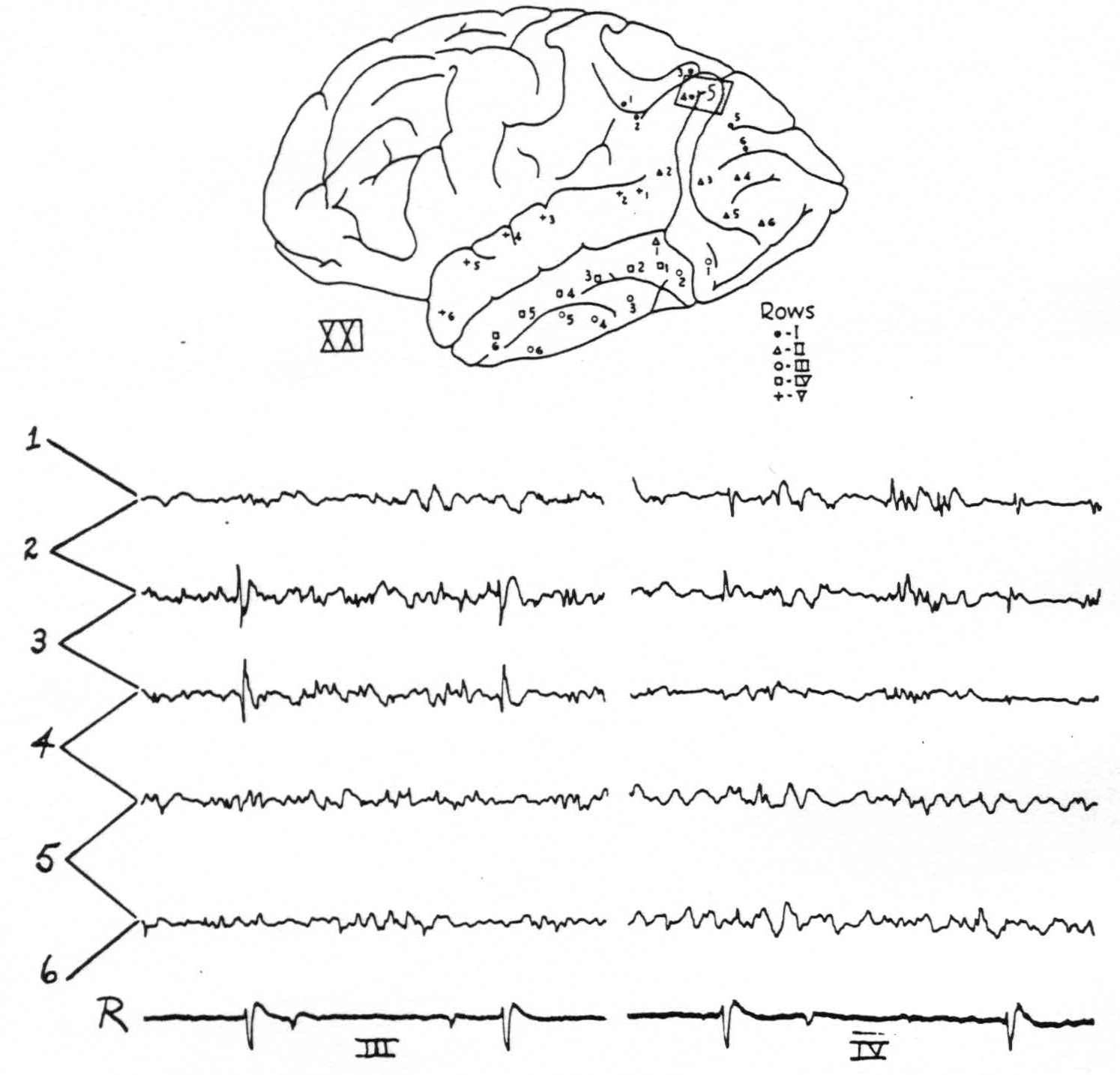 Figure 2. Chimp. XXI. Strychninization 5. Left hemisphere. Diagram shows localisation of strychnine 5 and position of electrodes. The tracings are of rows III and IV. Firing in 3 of row IV and in 1, 2 and 3 (feebly) of row III. Rover at the bottom.

FFA of v. Economo in the human brain) produces well-defined strychnine spikes propagated to the anterior portion of the temporal lobe—that is, to what Brodmann calls area 38 in his map of the human cortex. Figure 3 exemplifies this.

The negative findings are equally important. First, at no time were any strychnine, spikes propagated in the reverse direction between the areas indicated. Finally, no other tracts were found connecting equally remote portions of the hemisphere.3

The method of local application of strychnine and recording action potentials has been shown to disclose not only the existence but also the direction of the fibers between the gray masses of the brain; for strychnine acts only where axonal terminations contact cell bodies and causes disturbances propagated in the normal direction, not antidromically. Thus it was reasonable to expect that its application to the problem of the direction of the long associational tracts of the cortex would help to show in what areas these systems originated and terminated. Burdach, (1819-1826), Arnold (1838) and others, by dissection of the human brain, discovered four main associational bundles

Figure 3. Chimp. XIX. Strychninization 24. Firing (11) at site of strychninization and (22) and (33) at tip of temporal lobe. Bipolar recording. Sketch of the ventral surface of the brain shows area strychninized and location of electrodes.

but, because of obvious deficiencies of the method, had not been able to determine accurately their origins or terminations. Subsequent anatomists have usually been content with schematic representations, one of which, ascribed by Tilney and Riley to Meynert, is given below (Fig. 4). It was a matter of surprise that each of the three associational bundles herein reported was found to be unidirectional in its transmission, and to arise and to terminate in a functionally and cytoarchitectonically unique area of the cerebral cortex, as indicated in Fig. 4.

In addition to the long longitudinal fiber systems others, running in a transverse direction, have been described in the human cerebral hemisphere. Those described within the occipital cortex—vertical occipital fasciculus of Wernicke, stratum proprium cunei of Sachs, transverse occipital fasciculus of the lingual lobule of Vialet—are evidently, as was shown by v. Bonin, Garol and McCulloch (5), fibers connecting various parts of the parastriate area. In general these are not as distinct bundles as are the longitudinal fasciculi. It might be pointed out here that we have found abundant evidence of such long transverse fibers in the firing of entire vertical bands on the convexity of the sensory cortex of the chimpanzee, but rarely of a definite fasciculus arising in one cytoarchitectonic area and terminating in another remote area. At least one such exists, however, in the parietal area of the chimpanzee. It extends from just above the interparietal sulcus to an area just above the posterior part of the Sylvian fissure.

Special emphasis should be laid on the time relations, for the conduction in each of these associational bundles occurs with axonal velocities. In fact, it requires high paper-speed to distinguish on an inkwriter record which

strychnine spike occurs first—i.e., the one in the propagating area or the one in the recipient area. The contrast between the rapidity of these disturbances and those which are relayed—i.e., are post-synaptic—is brought out by the experiment in which the strychnine spike was conducted the long distance from area 8—i.e., band I—to both ipsi- and contralateral areas 18 at high velocity; whereas the relayed spike crossing from one area 18 to another, after partial strychninization of one of these areas, is delayed so long that the last traces of the axonal termination spike has subsided—in a matter of more than 50 msec. (Fig. 1).

Consideration of the functional organization of the primate cortex as a whole might suggest the existence of a pathway from the temporal lobe to remote regions of the cortex, but the present experiments have failed to reveal any such structure.

By applying strychnine locally to the cerebral cortex of the monkey and chimpanzee, and recording the electrical activity, the origin and termination of homologues of three of the well-defined long association bundles of the human cerebral cortex have been disclosed. From area 8, the frontal suppressor area, there arises a tract leading to area 18, the parastriate area; this is probably part of the superior longitudinal fasciculus of Burdach. From area 18 there arises a tract leading to area 20, on the inferior temporal convolution; it is usually called the fasciculus longitudinalis inferior, and may comprise also what anatomically has been called the vertical occipital fasciculus of Wernicke. There is a tract arising from the area orbitalis agranularis (called area 47 in the human brain) passing to the tip of the temporal lobe (called area 38 in the human brain); it is ordinarily called the fasciculus uncinatus. Each of these pathways normally conducts in one direction only.

1 Reprinted from Journal of Neurophysiol, 1943, 6:129-134. ↩
2 Aided by grants from the John and Mary R. Markle, and Rockefeller Foundations. The Dial used as an anesthetic was kindly furnished by the Ciba Company. This material was presented before the American Neurological Association at its 68th annual meeting in Chicago, June 5, 1942. ↩
3 In recent experiments on the medial surface of the hemisphere exceptions to this statement have been found. ↩