FUNCTIONAL ORGANIZATION OF SENSORY AND ADJACENT CORTEX OF THE MONKEY12 [44]

In previous papers concerning the functional organization of the sensory cortex(1, 2) the boundaries of that area have been mentioned and it has been stated that strychninization immediately outside of it failed to fire any part of it. So clear was the evidence to this effect in Macaca mulatta that it was used as a criterion of the sensory cortex in the researches on the chimpanzee.(3, 4, 5, 6) The present study deals with the properties and relations of these adjacent regions and with detailed observations on constituent areas of the sensory cortex which had to be precisely determined in order to be certain as to the site of electrodes and strychninizations here employed. These experiments were interspersed among studies of the same regions on the chimpanzee's brain in which it was often possible to keep strychninization confined well within a single physiologically unique band and thus to obtain a clearer conception of what to attempt in the monkey. More precise knowledge of several areas has thus been brought to light so that, aided by occasional histological control, it is now possible to improve on the previous diagram of functional organization within the sensory cortex and to be relatively certain about cytoarchitectonic correlations.

All experiments were performed upon monkeys (Macaca mulatta and one mangabey) fully anaesthetized with Dial3 (0.45 cc. per kg. body weight, ½ the dose given intraperitoneally, ½ intramuscularly). The animal's head was then secured in a head holder. Strychnine was applied to the cortex by placing thereon pieces of filter paper, 1 to 4 sq. mm., moistened with 3 per cent solution of strychnine colored with toluidine blue. All records of electrical activity were made by means of six channel Grass amplifiers and ink writers. Thirty-six electrodes—each a silver wire ending in a small silver ball—were placed on the cortex. These were arranged in groups of 6 to facilitate switching and the activity of all 36 loci was recorded before and several times after each local strychninization.

The identification of the strychninized area was made by pricking or slitting it with a sharp knife at the time the strychnine paper was removed, fixing the brain in alcohol, sectioning, and staining with toluidine blue. For the certain cytoarchitectonic identification of areas 2s and 19s with Brodmann's 2 and 19 respectively we are indebted to Dr. Gerhardt von Bonin.

Application of strychnine to any gray mass causes large sudden voltages to appear in all places where the axons, or collaterals, of cells in the region strychninized terminate. These sudden voltages—called strychnine spikes—serve, therefore, to reveal the directed functional relation of various cortical areas.(7)

Figure 1 is a new map of the sensory cortex and adjacent regions. It is made on the basis of the previous maps of the sensory cortex and has been extended in conformity with the new findings. The numbers indicate the cytoarchitectonic areas of Brodmann(8) and the Vogts(9) but are simplified in the face region where no distinction could be made on the basis of organization 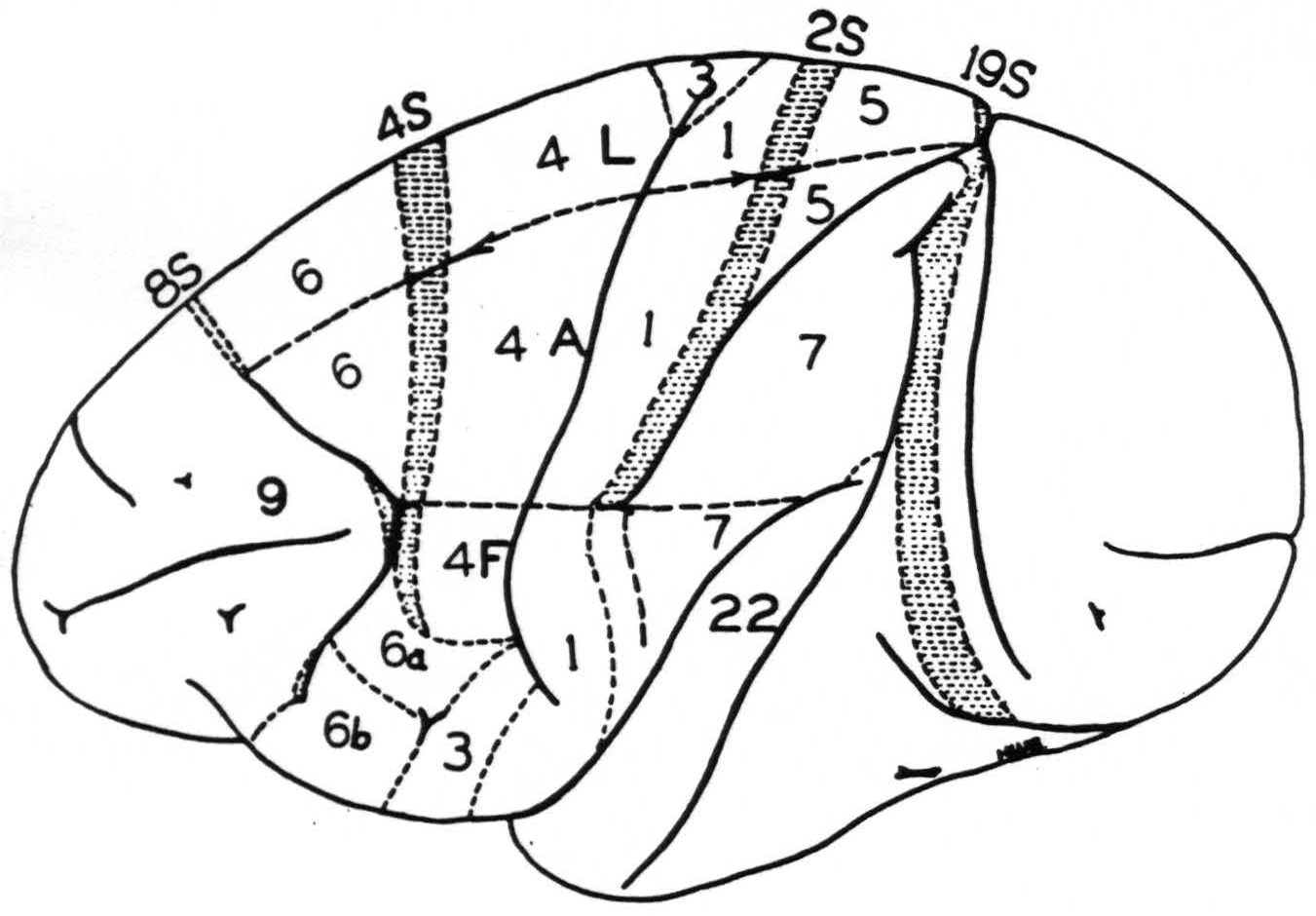 Figure 1. Macaca mulatta. Diagram of sensory and adjacent cortex and convexity of hemisphere. Areas 6, 4s, 4, 3, 1, 2s, 5 and 7 constitute the sensory cortex. Letters L, A and F indicate the functional subdivisions for leg, arm and face respectively. ≡ ≡ ≡ ≡ ≡ ≡ indicates areas from which suppression of electrical activity of the cortex can be obtained. Of these areas 8s and 19s are immediately adjacent to the sensory cortex but not part of it.

between 6b𝜶 and 6bβ. The subdivisions for leg, arm and face are indicated by the appropriate letters. 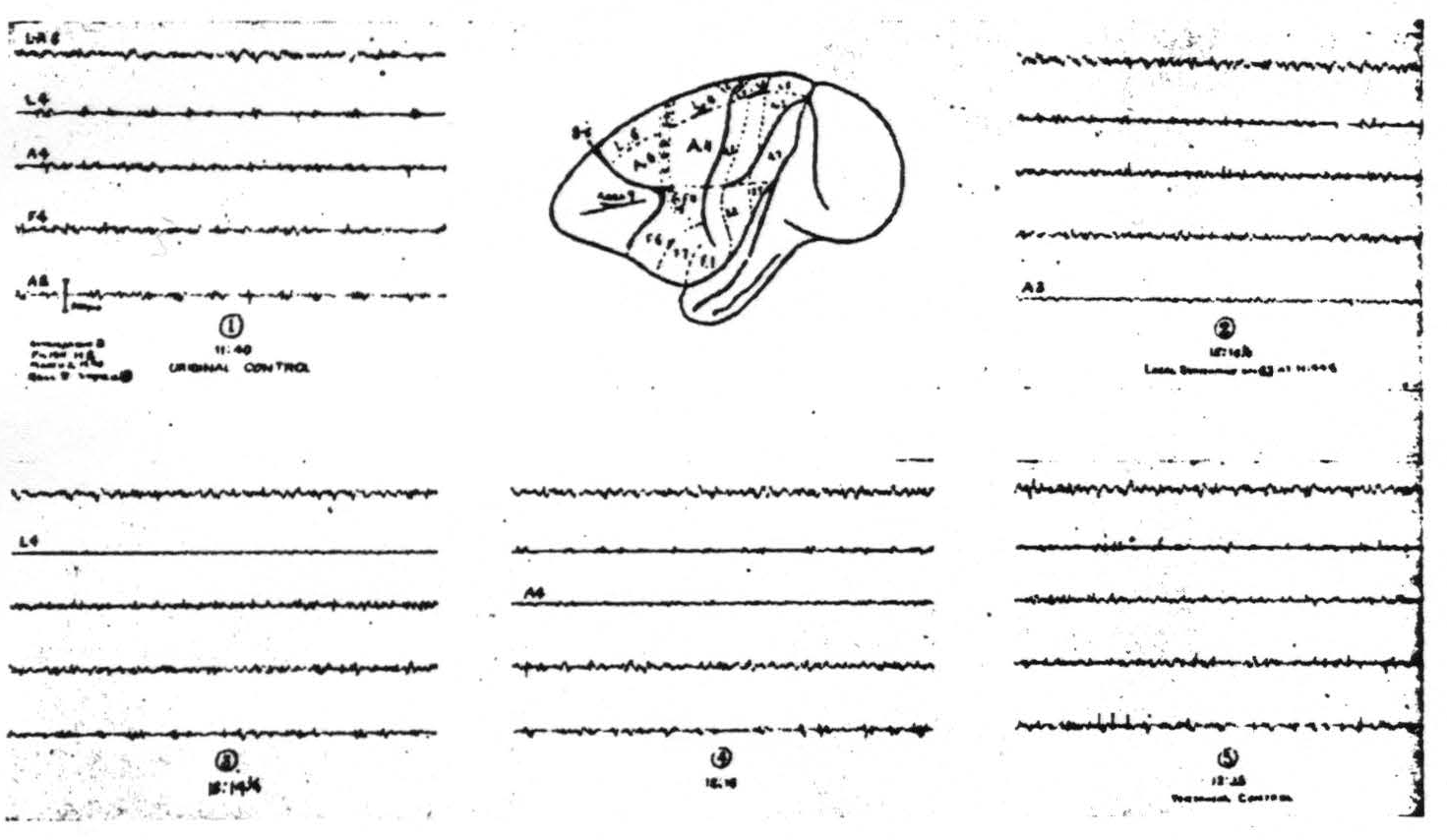 Figure 2. March 2, 1940. Macaca mulatta. Dial. Strychninization of 8s showing suppression first seen in A2 later in L4 then in A4.

Two observations concerning the variations of the areas with respect to anatomical landmarks deserve mention.

(i) Area 8s, identified by the elicitation of eye movements and by strychninizations which yield suppression of electrical activity of the cortex, extends from the medial aspect of the hemisphere(11, 15) laterally between areas L6 and 9 to almost the superior end of the medial limb of the sulcus arcuatus. From this point downward it usually passes into the anterior lip of the sulcus to emerge again only for a short distance as it crosses the concavity of the sulcus. However, it has appeared in one animal on the medial lip of the upper ramus, disappeared into the depths to reappear on the surface posterior and lateral to the sulcus in what is normally F6b; whereas, in another animal it crossed the concavity ending anterior to the tip of the inferior ramus.

(ii) Even greater variation occurs at the posterior margin of the sensory cortex above the sulcus interparietalis, where exploration is rendered difficult by a complex of veins in the vicinity of the sulcus parieto-occipitalis. Here precise localization can be obtained in only a small percentage of hemispheres, yet even these few disclose that area 5 sometimes extends into the sulcus parieto-occipitalis, and area 19 appears on the occipital lobe posterior thereto. In extreme cases area 5 stops short and area 19 appears in the parietal cortex and may even be separated from the sulcus parieto-occipitalis by an area a millimeter or two wide exhibiting properties of an area normally found in the occipital lobe. This latter arrangement resembles closely the relation to landmarks most frequently encountered in the chimpanzee.

Two aspects of the present findings should be mentioned. The first of these is the existence of the suppressor bands 8s and 19s which bound the sensory cortex, except for area 22 occasionally coming to the surface in front of the first temporal sulcus. As the animals used in this experiment were frequently used also for studying cortico-striatal projections,(10, 16) it is possible to be certain that area 8s, like area 4s, projects to the nucleus caudatus. As it has already been shown that this projection is responsible for suppression from 4s, it seems only reasonable to conclude that it is likewise effective in the case of 8s, particularly in view of the finding that strychninization of the nucleus caudatus can itself produce suppression by blocking thalamo-cortical reverberations. As yet it has not been possible to demonstrate similar projections from areas 2s and 19s.

There are, therefore, on the convexity of the hemisphere of the monkey four suppressor bands, two within and two just without the sensory cortex and all four are alike in their failure to fire other portions of the sensory cortex. Thus it resembles the chimpanzee's functional organization.

The second point requiring comment concerns the clarification of the findings in strychninization of 4s and 2s. In the case of 4s, the pure picture differs from the previous mixed (which we had mistaken for pure) merely by the omission of firing elsewhere. In the case of 2s (which we, lacking histological control, had tentatively called 1) the change is more complicated. Reference to the previous diagram of functional organization(1) shows that areas 2 and 5 had no difference as to other regions fired from them, a finding out of line with those for all other areas strychninized. The difference which now appears is that the area we had considered to be 5 failed to fire other parts of 5, whereas 2 did so. It is now clear that both were really area 5, and that within 5 the firing is more restricted in the most posterior portion. In the paper mentioned above all mention of leg or arm 3 was omitted, for it is difficult to strychninize it without touching area 1 and the difference in firing of other areas from 3 and 1 is not clear enough to be absolutely certain of the results. The same may be said of pickup electrodes intended for area 3, i.e., disturbances from 1 may be included. It seems therefore wisest to omit area 3 from the schematic representation of the findings except for the face region. When these modifications are made the new scheme and the new map bear a still more striking resemblance to that of the chimpanzee, at least so far as the leg and arm regions are concerned.

As already stated, the work on the chimpanzee gave clues as to what might be expected in the monkey, for, being larger, the bands of the chimpanzee's cortex were more easily strychninized separately. Lest the work on the chimpanzee be thought to have been unduly influential in producing the similarities noted above it should be emphasized that, in the monkey, repeated careful attempts to distinguish two bands in area 4 and any subdivision into bands of area 5 or 7 have failed completely, except for the more restricted firing in the posterior part of area 5. Whether the failure to find these differentiations is due to their non-existence or to the small size of the area to be subdivided cannot be determined by the procedures here employed. On the other hand, if one considers the threshold to electrical stimulation, 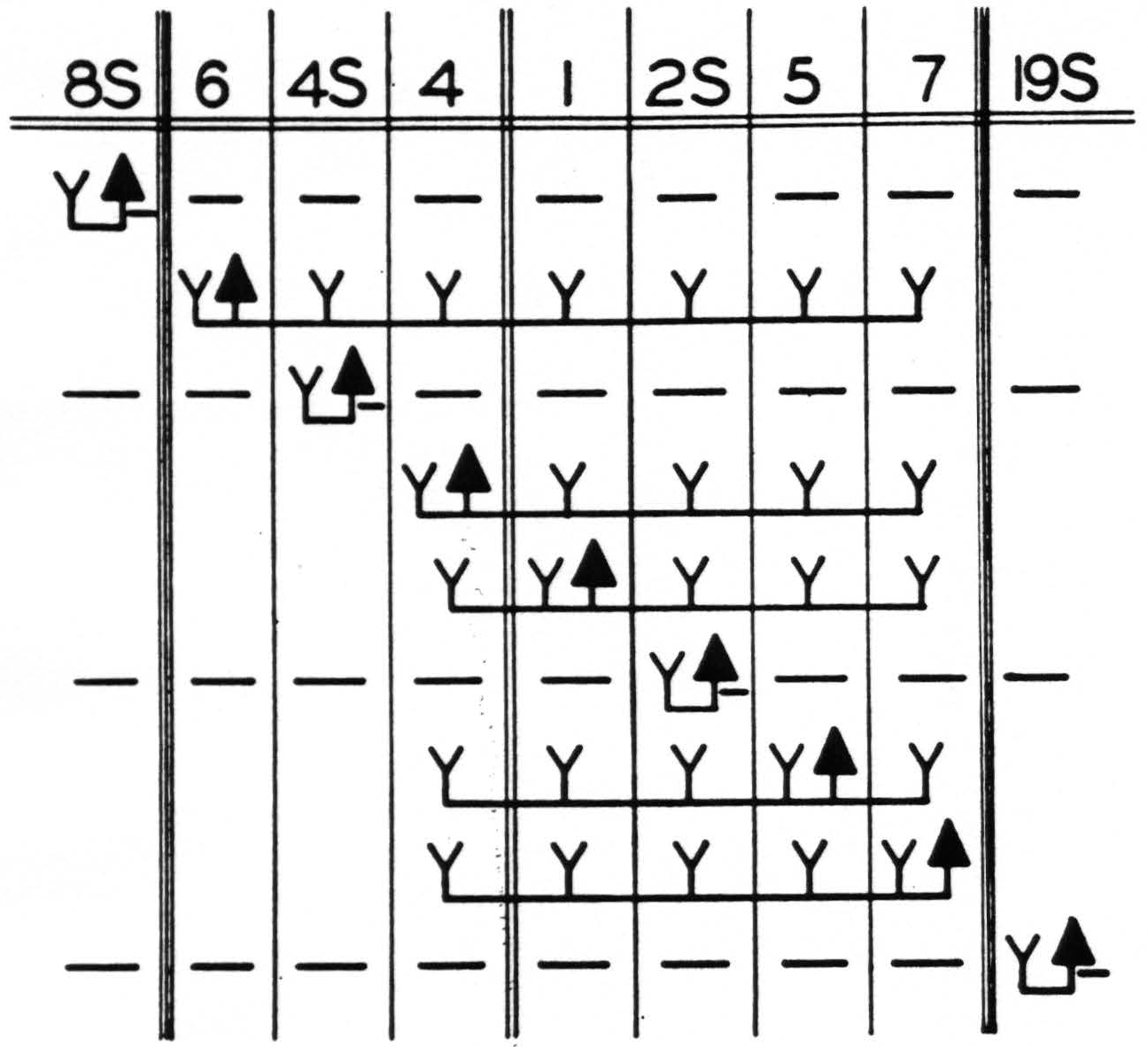 area 4 of the monkey is divisible into two bands, and, as excitation by strychninization remains generally more nearly confined to its site than does that by electrical stimulation, one would expect that a difference of functional organization of these bands in 4 would certainly be discoverable it if exists. It was hoped that the somewhat larger brain of a large mangabey might have sufficiently larger areas to show separate bands in areas 5 and 7 but it failed so to do. In this manner and in these respects the monkey's brain seems to lack differentiations found in the chimpanzee and here the maps remain significantly dissimilar.

The accompanying schematization (Fig. 3) indicates only those findings which are well established in the monkey and summarizes the results of the present and previous investigations of the functional organization of the sensory and adjacent cortex.

Hines, Marion. The anterior border of the monkey's (Macaca mulatto) motor cortex and the production of spasticity. Amer. J. Physiol., 1936, 116: 78.

1 Reprinted from Jo_urnalof NeTyphvsiologa, 1941, 4:324-330. ↩
2 Aided by a grant from the Fluid Research Funds orthe Yale School of Medicine. ↩
3 We wish to thank the Ciba Co. for kindly putting the Dial at our disposal. ↩