This special issue was inspired by papers presented during the inaugural Social Innovation and Complexity Stream at the 9th International Social Innovation Research Conference (ISIRC) in 2017. The introduction of a complexity stream at the 9th ISIRC builds upon two previous International Conferences on Social Entrepreneurship, Systems Thinking and Complexity that were held at Adelphi University, Garden City, New York in 2008 and 2010.

The theme of the 9th ISIRC was 'Beyond Boundaries? Organizations, Systems and Social Innovation'. In line with the conference theme, the call for papers for the Social Innovation and Complexity Stream was particularly interested in receiving abstracts that explored the role of complexity theory for social innovation beyond boundaries.

More generally the stream's call for papers highlighted that from a complexity perspective, social innovation had been described as the shift from an original attractor which represents business as usual, to a new attractor which represents the social innovation (Goldstein et al., 2010: 104). It also noted that 'systemic innovation' that incorporates an understanding of complexity and complex adaptive systems has been recommended as the most appropriate form of social innovation for addressing wicked problems (Davies et al., 2012). Systemic Innovation is defined as 'a set of interconnected innovations, where each is dependent on the other, with innovation both in the parts of the system and in the ways that they interact' (Davies et al., 2012: 4). Wicked problems are complex social policy problems that societies face which cannot be definitively described and that do not have definitive and objective solutions (Rittel & Webber, 1973: 155).

Eleven papers were presented during the inaugural ISIRC Social Innovation and Complexity stream. These papers all referred to complexity, yet were very diverse: they ranged from considering a situation as being complex to viewing complexity as an inherent property of a system. This distinction supports Schlindwein and Ison's (2004) classification of complexity as being either perceived or descriptive. Perceived complexity is the state when an observer perceives a situation as being complex. Complexity in this case is an inherently subjective concept. As a practice, perceived complexity uses systems thinking to learn how to take purposeful action to improve a situation. In contrast, descriptive complexity considers complexity to be an intrinsic property of complex systems. For descriptive complexity, complex systems are considered to have characteristics that are external and independent of observers (Schlindwein & Ison, 2004). Goldstein et al.'s (2010: 104) description of social innovation as a shift from an original to a new attractor that represents the social innovation is an example of a descriptive complexity approach. 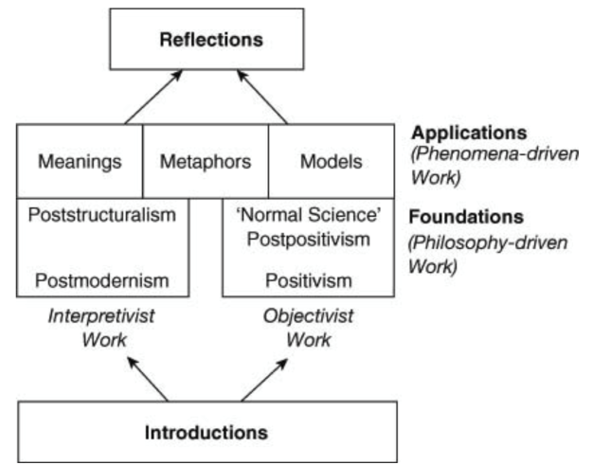 Maguire et al.'s (2006: 174) map is intended to be read from bottom to top. The first component of the map, 'Introductions', consists of 'articles that introduce complexity and related sciences to organizational scholars, assert their applicability and utility, and spell out implications for some field of study' (Maguire et al., 2006: 174). Much of the early literature on complexity-inspired organizational studies focused on introductions (Maguire et al., 2006: 174). The second component is the foundations of complexity science in organization studies. Maguire et al., (2006: 165) found that objectivist and interpretivist work were the two epistemological stances that inform the complexity science and organization studies literature either explicitly or implicitly. The next component of Maguire et al.'s (2006: 174) map is Applications. The Applications component distinguishes between models, metaphors and meanings. Maguire et al. (2006: 189) assert that formal models of complex systems do not all draw on or develop computational or mathematical models, that much of this:

... objectivist work is, in fact, qualitative and aimed at building theory to serve as a basis for subsequent hypothesis testing or computational modelling.

Models are favored by the objectivist perspective which is considered to be a reduction strategy for managing complexity (Maguire et al., 2006: 165). Complexity reduction involves obtaining an understanding of complexity and acting on it directly (Boisot & Child, 1999: 237). In contrast, the interpretivist perspective is considered an absorption strategy for handling complexity: it explores meanings and is more likely to advocate for metaphorical approaches (Maguire et al., 2006: 165). Complexity absorption generally involves the creation of options and developing strategies to reduce risk often through collaborations (Boisot & Child, 1999: 237).

The Applications component of Maguire et al.'s (2006: 174) map separates the metaphorical approaches into work that is reflexive, faddish and prone to claims that are unsupportable and work that rests on a firmer foundation (Maguire et al., 2006: 165). Management ideas can be vulnerable to faddism if they are not legitimized by being underpinned by a foundation of quality research.

If a similar map was developed for the field of complexity science and social innovation it would need to incorporate critical realism within the Foundations component of the map. Critical realism is considered the most popular form of realism in the social sciences (Maxwell, 2012: 4) and mediates between the objectivist and interpretivist foundations. Critical realists consider that while there is a real world that exists independently of our perceptions and constructions, our knowledge of the real world is not simply representational: it is inevitably interpretive as we construct it from our perspectives and standpoint (Frazer & Lacey, 1993: 182; Maxwell, 2012: 5).

Four papers from the ISIRC inaugural Social Innovation and Complexity stream have been selected and revised for publication in this special issue.

This second paper in this special issue also has a leadership focus, operationalizing theoretical constructs drawn from Complexity Leadership Theory (CLT). Drawing on a case study illustration, Summer and Whittington highlight the enabling behavior of the two co-founders of a not-for-profit. Applying the analytical frame of Generative Emergence, the authors conclude that the co-actions of the two founders of a not for profit constitute enabling leadership behavior. The authors hope that consideration of enabling leadership behaviors of the kind presented in this case study will catalyze further research into the functions of enabling leadership within the context of social innovation.

Fitzgerald, Newth, Shepherd and Woods also explore social innovation in the not for profit sector. They explore the challenges faced by four organizations who have introduced a commercial business model and the changes needed to accommodate/integrate such a perspective. In each of the four case studies discussed, the Business Model serves as a structural attractor that has converging, diverging and unifying dynamics. They provided a detailed definition and discussion of each of these dynamics.

In the final paper, Misuraca and Codagnone present the iFrame: A framework designed to help policy makers and practitioners alike develop and evaluate interventions in the area of social innovation. The i-Frame can be applied at different levels and follows a structured sequence of steps that include:

The set of tools assembled to be used through these steps also support collaborative interactions between stakeholders as they co-design and co-produce social innovation.

The contribution of all four paper is in keeping with the 'application' component of the complexity map above.  According to Maguire et al. (2006), the application component "includes 'Phenomena-driven' work that applies complexity science constructs and methods to investigate, explain and generate usable knowledge of particular organizational phenomena" (Maguire et al., 2006).  Each paper builds upon the 'foundations' component to provide an application in the real world. We invite readers to now review and reflect on these contributions.