A review of Thinking for a Living: How to Get Better Performance and Results from Knowledge Workers 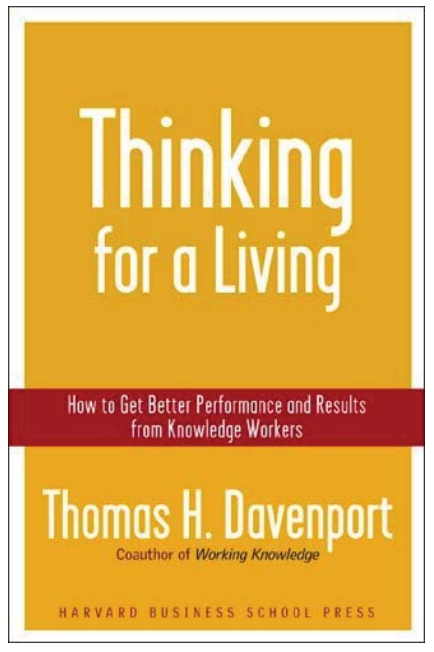 Tom Davenport has done us all a big favor by writing this book. He has clarified what it takes to “get better performance and results from knowledge workers.” As his book makes clear, this is a large, complex, multi-faceted and probably long-term—but doable—task. Although it won't happen overnight, it can indeed happen, as Davenport shows by way of numerous examples and illustrations. Along the way, he places several well-known initiatives in their proper and useful context (e.g., knowledge management, communities of practice, decision and performance support systems, and social network analysis to name a few). As befits a professor, one who holds the President's Chair in Information Technology and Management at Babson College, Davenport's book is thoroughly researched and very well-documented. It is also an easy read without being simplistic. In short, his book is scholarly without being academic.

To my surprise, I came across that same citation on page 8 of Davenport's new book. When it comes to knowledge work and knowledge workers, we both seem to have been greatly influenced by Drucker.

Knowledge workers have high degrees of expertise, education, or experience, and the primary purpose of their jobs involves the creation, distribution or application of knowledge. (p. 9)

In Chapter 2, Davenport lays out some of the differences among various kinds of knowledge workers using the consultant's favorite tool, a 2x2 matrix. His matrix places the level of interdependence on the vertical axis (ranging from individual actors at the bottom to collaborative groups at the top) and the complexity of the work on the horizontal axis (ranging from routine on the left to interpretation/judgment on the right). These two axes yield four categories or classes:

Clearly, what it takes to “get better performance and results from knowledge workers” varies with the kind of work and worker. Davenport elaborates on each category and includes comments about illustrative interventions. But his main treatment of the intervention issue occurs in Chapter 3. There, he hammers home the point that interventions will have to vary with the kind of work and worker, especially when it comes to measures of performance. He also touches on common mistakes made.

In Chapters 4 through 9, Davenport discusses six basic categories or angles of attack to the task of making knowledge work more productive.

Chapter 4 focuses on the process perspective. As the author of the first book on reengineering, Davenport is eminently qualified to comment here. And he warns of the likely failure of efforts to impose externally-engineered processes on knowledge workers. He argues instead for a collaborative approach. He also argues that the most common forms of successful process-oriented improvements are likely to be participative, incremental and continuous.

Chapter 5 centers on the use of technology. Here, as you might expect, Davenport addresses many of the technological initiatives that many of us have encountered in the workplace (e.g., knowledge re-use, decision support and automation, data mining/analytics, and embedded knowledge). He very usefully arrays these in an overlay on the matrix he developed earlier. Again, he makes the point that not all interventions (in this case, technologies) are appropriate for all kinds of knowledge work. Scripts for call center workers might succeed there, but will certainly fail with researchers. Here is where Davenport touches on knowledge management, an area where he is also well-qualified to comment.

Chapter 7 moves away from the individual to the social context in which the individual operates; specifically, social networking. Numerous instances are cite d in which high-performing knowledge workers attribute much of their success to their networks In this chapter Davenport points to communities of practice as one avenue for improving knowledge worker performance and results, including a tool known as social network analysis.

Chapter 8 will warm the hearts of some old OD consultants, especially fans of Fritz Steele. Here, Davenport addresses the physical environment and its impact on knowledge worker performance. As is the case throughout his book, Davenport warns against one-size-fits-all approaches and issues a subtle warning to those who would shift from offices to cubicles for the sake of saving on space costs. Those costs will show up elsewhere and could easily offset or outweigh any space cost savings. The message here is that the physical environment should support the kind of work being done and several examples illustrate how physical-space interventions work and how they can backfire.

Chapter 9, the last chapter, treats the subject of managing knowledge workers—as well as the rather obvious issue that managers are themselves knowledge workers. Given the ever-increasing importance of knowledge workers to today's organizations, Davenport opens with the proposition that a key task of those who manage knowledge workers must be to recruit and retain them. As he illustrates, that's easier said than done. Worse, he adds, “..the evidence suggests that most firms are moving in the wrong direction on recruitment and retention issues” (p. 197). As with all the preceding chapters, this one includes at its end a helpful set of recommendations for getting results from knowledge workers. Davenport closes this chapter and his book with the following comment:

Peter Drucker wasn't exaggerating when he noted that the fate of advanced economies depends on making knowledge workers more productive. There is no business or economic issue that is more important to our long- term competitiveness and standard of living. (p. 208)

I agree and if you buy and read his book, as I am unabashedly encouraging you to do, I think you will too.

Allow me to conclude with what I believe to be three major contributions of Davenport's book: First, he clearly articulates the scope, scale and complexity of Peter Drucker's challenge (i.e., to make knowledge work productive). Next, he provides us with a useful conceptual framework and dozens of illustrative interventions that can help us tackle that challenge successfully. Last, he does so in an easy-to-read yet scholarly way, which means he makes it possible for us to access his knowledge in a straightforward, painless way. His book is a giant step forward.