A review of Complexity as a Sensemaking Framework 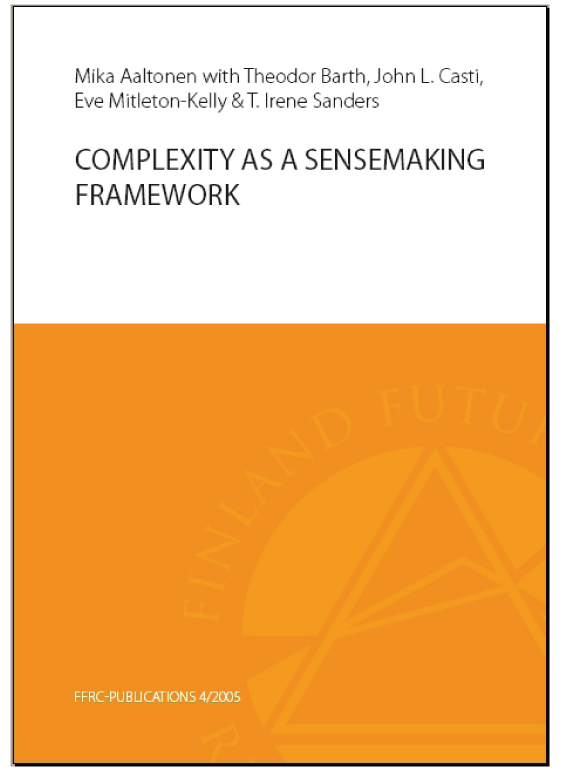 This short book is a collection of four articles that are loosely organized around understanding complexity within organizations, hence a sensemaking framework. The lead author believes that competitive success comes from being able to make sense of how the future unfolds and the ways to get to the future. Both aspects of sensemaking are built on a foundation of understanding how and why the organization has evolved to its current state.

The second chapter lays out a taxonomy for complexity based tools, building on an earlier United Nations study on futures research methodology which classified 23 methodologies in use since the 1940s. The opening three pages provide a brief overview of complex adaptive systems that is not all encompassing, but does have some insights for futures research. For example, the unpredictability of nonlinear systems does not mean that such systems cannot be influenced or that the mechanism cannot be studied. A sand pile simulation is used to illustrate that the mechanism of avalanches can be studied and even predicted for near future horizons. Yet the size of the avalanche is a consequence of the history of earlier avalanches and is therefore unpredictable in magnitude.

The earlier UN study used a traditional classification of qualitative and/or quantitative and normative and/or exploratory. An alternate two-dimensional classification system was used by the authors here to classify the same methodologies by degree of control or direction and the origin of the outcome. While both dimensions are continuous the authors did split each range into two segments thereby creating four quadrants within the matrix. The four quadrants are engineering approaches (design-rules), systems thinking (design-heuristics), mathematical complexity (emergent-rules), and social complexity (emergent-heuristics). After reclassifying the earlier futures research methodologies, the authors added new tools coming from complexity (chaos fractals, cellular automata, artificial intelligence, quantum politics, dialogue processing, action research, adaptive networks, change analysis, etc.). The result is an academic platform for future studies in futures research. However, there is no depth beyond the classification system and no justification is given by the authors for where each methodology was placed along the two dimensions. The practitioner will only find the names of research methodologies without any explanation on what the research method is and how it is employed.

The article that comprises the third chapter can also be found on the internet with the notation that it has been submitted for publication in E:CO. Therefore, regular readers of this publication may have the personal opportunity to read that chapter themselves without requiring access to this book. Suffice it to say that this article was an interesting case study that contrasted two corporate mergers and the different approaches used in blending the companies together. Elements of co-evolutionary processes were clearly evident in the one merger that was successful on many levels, especially in the use of experimentation to find different ways the two companies could come together. The other merger case started off well, but quickly ran into difficulties that did not respond well to tight controls and there was a cultural risk aversion that limited any experimentation with new ideas. While difficult to generalize from two case studies, this article would be beneficial to anyone involved in mergers or acquisitions. It would also hold benefit for anyone involved in organizational change and the cultural conditions that enable the search for new solutions to new problems.

The next chapter makes up about a third of the book and can be summarized by this reviewer as ‘confusing’. Connecting to the author’s intent was very difficult on many levels. First, there was no introduction or summary of the article. Instead the article led with a figure made up of 10 nodes and 22 connecting relationships, each matching one of the 32 numbered paragraphs in the article. The first impression is one of excitement that the author was attempting to write in a web style instead of the traditional linear format of books and articles. Using the internet as a comparison, each node would be a page with specific content and the connecting relationships would represent some construct linking content together. However, this was not the case. Most paragraphs stand along without clarity in how nodes are being connected and what the relationship means in the context of the material being connected. The material doesn’t really flow in a linear style either since the connection from one paragraph to the next is often minor, though still better connected than trying to understand the opening figure as a map through the chapter. The paragraph headings did match the text found on the figure, but were often a word or phrase that was not central or even used within the paragraph text. Within the paragraph, about half the sentences have a highlighted word or phrase indicating something special or something being defined. However, this only added another mystery for the reviewer to study.

While many examples of this reviewer’s confusion can be recounted, only one will be included here. Paragraph 12 is under the heading “learning” yet the word is not repeated anywhere in the paragraph. “Ability to respond” and “adaptive” are italicized, but are used in the same sentence calling for a “proper understanding of structural heterogeneities.” The fact that there are 11 italicized words or phrases in the eight sentences in the paragraph leads to further confusion regarding the significance of something being italicized. Going back to initial map of paragraphs, this paragraph on “learning” is a relationship link between the nodes labeled “kindness” and “foundation.” The basis for the linkage was not clear, at least to this reviewer.

Collectively, this chapter comes across as many good, but independent, thoughts that have not been fully fleshed out and linked together with a specific purpose. Further, the chapter title implies disordered systems are a means “toward an agenda for a meso-level analysis of reflective actors,” which could not really be found, at least by this reviewer. In the introduction to the book, the lead author described this chapter as “an agenda for disordered systems, i.e. non-ordered systems in relation to each other where the systemic features do not derive from top-down governance.” Repeated attempts by the reviewer to connect to the author’s intent failed. Giving the author the benefit of the doubt, it is possible that this reviewer lives in a different paradigm and failed to see what was before him. Another possibility is that the language translation of a high-level academic text into English failed to accurately convey the author’s intent.

The last chapter was only nine pages long, but its topic of complexity simulation could easily be expanded into a book by itself. The real failing of the chapter is that it wets the reader for more, but stops after introducing different simulations. The brief introductions include financial market behavior, insurance risk, and customer paths in a supermarket. The real insight comes from the structural design of the simulations. Instead of approaching the simulation with numerous quantitative rules, the structure is built on rather simple qualitative rules and rules for changing the rules. The simulation is then run with many agents over many time periods. Essentially, the simulation is very similar to the flocking behavior that emerges from the simple rules in the well known boid simulation. While not giving sufficient detail to reproduce any of the simulations, the author does provide just enough for the reader to think about how to approach the design of their own simulation built on simple rules interacting to produce complex behavior. The reader begins to understand the potential, but is left wanting more.

Taken as a collection, it is difficult to recommend this book for any one audience. The chapter on mergers and acquisitions leans toward the practitioner, while the chapter on futures research methodology goes the other way to the academic side. The business simulation chapter would interest both sides, but both would be left wanting more. The chapter on the agenda for a meso-level analysis of reflective actors would probably best be left for academics who are comfortable with abstract concepts and whose interests lean toward the philosophy of complexity.