THE PROJECTION OF THE FRONTAL LOBE ON THE HYPOTHALAMUS12 [71]

In spite of the recent interest in the functions of the hypothalamus, little definite information about its afferent connections is available. Although physiological studies have suggested that the neopallidal cerebral cortex exerts some degree of control over the hypothalamus, no positive evidence of direct corticohypothalamic connections exists, except for the fornix and certain olfactory systems. By the method of physiological neuronography, a few direct corticohypothalamic pathways are here demonstrated.

The method used was that of physiological neuronography3: (1) in eight monkeys (Macaca mulatta) anesthetized with Dial.4 The strychnine was applied to various portions of the lateral surface of the hemisphere. The orbital surface was exposed by exenteration of the orbit with removal of the roof and lateral wall. The medial surface of the hemisphere was exposed by retracting the falx to the opposite side and allowing the brain to fall away laterally. The electrical activity at the site of strychninization on the cortex was recorded with a bipolar Ag-AgCl electrode and that of various hypothalamic nuclei was recorded by a bipolar, concentric needle electrode in which both elements were insulated except for their tips. The electrical activity of all electrodes was synchronously recorded with a 6-channel Grass electroencephalograph.

The intracerebral electrode was accurately placed by means of a Horsley-Clarke stereotaxic instrument. At the end of the experiment, the brain was routinely perfused with formalin and the site of the electrode microscopically determined from serial sections stained alternately by the Weil and thionin techniques.

The results are summarized in Figures 1 and 2. Both the negative and positive findings are included below. All projections were to the homolateral hypothalamus except as noted below. The areas of the cerebral cortex are numbered according to the functional scheme of McCulloch (1).

Supra-optic nucleus (S.O.). This nucleus is fired from area 10 on the lateral surface of the frontal lobe and also from an area immediately medial to the anterior tip of the arcuate sulcus (area 8). It is not fired from areas 9, 6a, 4s and 4.

Lateral hypothalamic area (just lateral to the dorsomedial nucleus. This region is indicated in Fig. 1 as being coextensive with D.M.). This region was strongly fired by strychninization of all portions of area 6a but not from areas 44, 4, 4s, 8, 9, 10, and 46 of the precentral cortex. 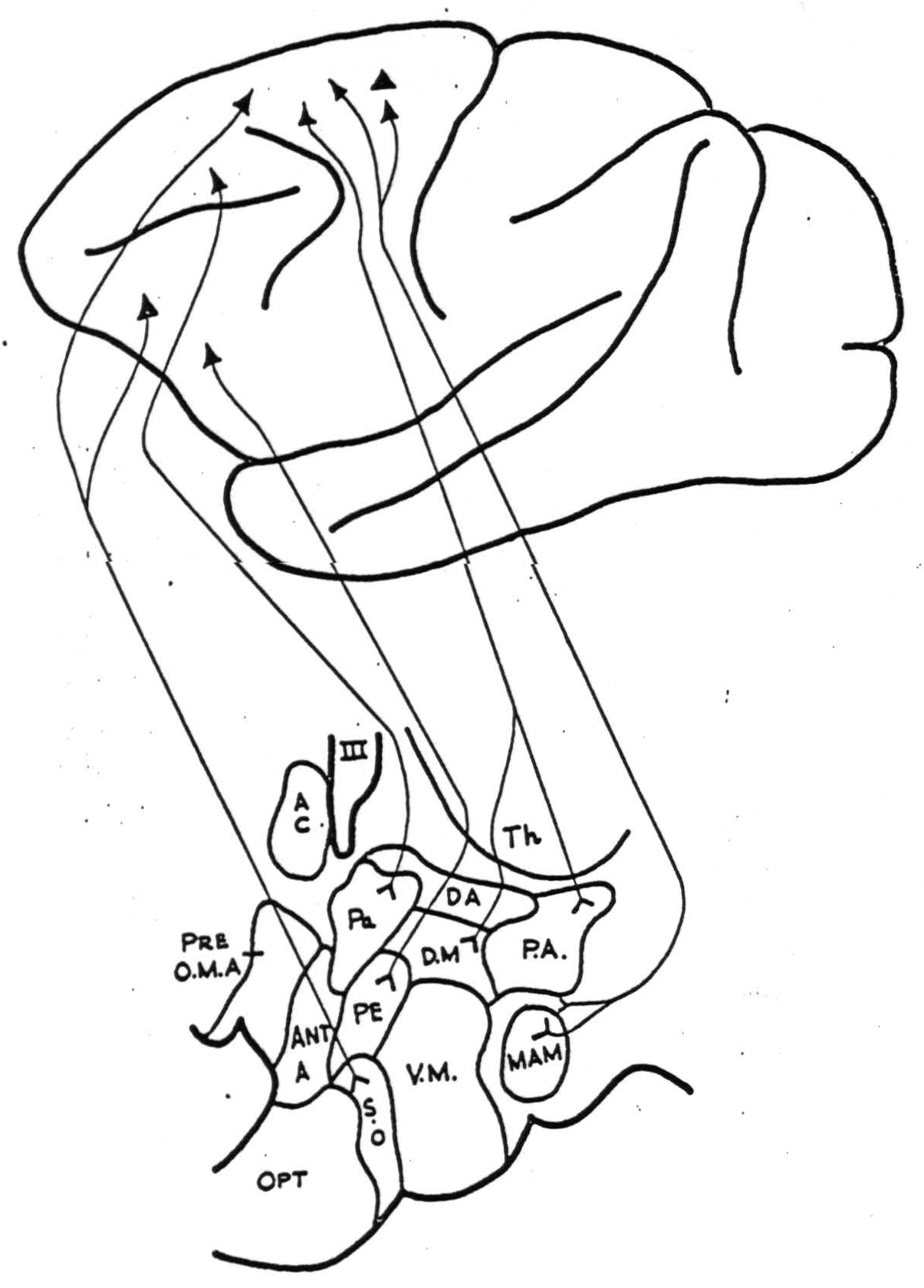 Mammillary nucleus (Mam.). Strong connections were demonstrated from all portions of 6a and possibly from area 4s, but none from areas 9, 46,10, 8, 6b, 44, 4 of the precentral cortex, from area 1 on the postcentral gyrus or from area 21 of the temporal lobe. Strychninization of the contralateral hemisphere areas 38, 21, 22, 17, 18, 19, 2, 1, 9, 46, 10, 8 and the entire orbital surface failed to fire it. No distinction could be made between the afferents to the medial and lateral mammillary nuclei. The supramammillary nucleus had the same afferent connections from the cortex.

Figure 2. Diagrammatic representation of homolateral cortico-hypothalamic projections from the orbital surface of the frontal lob.

Periventricular nucleus (P.E.) (in posterior hypothalamus, dorsal to mamillary nucleus). This portion of the periventricular nucleus was fired by strychninization of an area lying on the inferior portion of the lateral surface of the frontal lobe, slightly anterior to the origin of the lateral fissure (area 45). Areas 17, 18, 39, 40, 21, 5,1 of the postcentral, parietal and occipital cortex; area 23 on the medial surface of the parietal lobe; and areas 4, 44, or 46 of the precentral cortex failed to fire it.

Posterior hypothalamic area (P.A.). Projections were demonstrated from the posterior orbital cortex (area 47 and posterior 45) and also from area 6a both on the lateral and medial surfaces. The rest of the orbital cortex; areas 24, 25, 32, 9 or 11 on the medial aspect of the frontal lobe; and areas 9, 10 and 4 on the lateral surface of the frontal lobe failed to fire it. A questionable projection from area 46 was noted.

The only other finding of note was that application of strychnine to the orbital surface of the very tip of the frontal lobe uniformly caused a marked increase in the electrical activity, but no strychnine spikes, of the hypothalamus (posterior hypothalamic areas and paraventricular nucleus).

Mettler (2) has described Marchi degeneration extending into the septum following lesions of the precentral gyrus as well as of the prefrontal cortex. These fibers were found to be in association with the septohypothalamic nucleus and the periventricular fibers of Krieg. Physiological neuronography has failed to reveal projections from area 4, whereas it has shown projections from all portions of area 6 to the mamillary nucleus, to the posterior hypothalamic area, and to the lateral hypothalamus as well as from the prefrontal cortex to the supra-optic and periventricular nuclei. Mettler (3) also described Marchi degeneration in the lateral hypothalamic nucleus following a massive parietal lesion involving most of the cortex between the central sulcus and the lateral fissure (areas 1, 2, 5, 7, 39, 40), but we have no evidence concerning this by the strychnine method. We also have no evidence concerning the remaining pathway described by him, namely from the superior temporal gyrus to the later hypothalamic nucleus (4).

The many other attempts to demonstrate direct anatomical pathways between the cortex and the hypothalamus are inconclusive and have been summarized by Ingram (5).

While this investigation was in progress, the report of Murphy and Gellhorn was published (6). They claimed that strychninization of the gyrus proreus of the prefrontal lobe, the sensorimotor cortex, the primary acoustic area and the gyrus cinguli all caused firing in the anterior and posterior hypothalamus in the cat. No mention is made of the histological controls so it is not entirely clear exactly what nuclei were involved. Monopolar electrodes were used for recording from the subcortical structures. It has been shown (7) that monopolar electrodes will record a diphasic spike at least 2.5 cm. from a tract carrying strychnine spikes and that bipolar recording is thus necessary for accurate localization of such subcortical potentials (8). In view of the present results, it seems unlikely that widespread cortico-hypothalamic projections exist, such as Murphy and Gellhorn describe. They too noted that “the firing of nuclei by application of strychnine to the cortex was never as dramatic as nuclear or cortical discharge after injection of thalamus.”

Since little specific information is available about the function of the various hypothalamic nuclei, no conclusions as to the functional significance of these cortico-hypothalamic connections can be drawn. However, certain anatomical correlations are possible. It has been shown that the mammilary nuclei receive afferent connections from area 6a. This nucleus has efferent projections to the anterior thalamic nuclei which, in turn, project back to the cortex although the specific terminations are not known. The pathways are thus present for a recurrent circuit between cortex and the mammilary nuclei. The mammilary nuclei also have efferent projections which pass caudally in the mammillo-tegmental tract.

The posterior hypothalamic area likewise receives projections from area 6a and the orbital surface. The only well-established efferent pathways from this region run caudally in the periaqueductal grey. The supra-optic nuclei have been shown to receive afferent connections from the convexity of the frontal lobe anterior to the arcuate sulcus. The supra-optic-hypophysial tract comprises the main efferent pathway from this nucleus. The paraventricular nuclei receive projections from area 46 on the lateral surface of the frontal lobe and also from the orbital surface. They, in turn, project to the pituitary. The lateral hypothalamic area receives afferent projections from area 6a and has efferent paths which stream caudalward in large numbers, dorsomedial to the cerebral peduncle, mingling laterally with the descending pallidal fibers. Area 10 of the frontal cortex fires the posterior portion of the periventricular nucleus, efferent paths from this nucleus probably running caudally in the dorsal longitudinal fasciculus.

No cortico-hypothalamic connections could be demonstrated to the ventro-medial nucleus of the hypothalamus. This nucleus is said to receive afferent fibers from the globus pallidus but no definite efferent projections have been demonstrated. The controversial information about the various afferent and efferent paths from nuclei of the hypothalamus has been well summarized by Ingram (1).

The nuclei of the hypothalamus are embedded in a dense neuropil of fine fibers, many of which are not myelinated. For this reason, anatomical investigation of the effects of localized lesions has been hard. The fact that strychnine spikes have been shown to be propagated to a given region in this complex structure does not necessarily imply that the terminations of such cortico-hypothalamic projections lie at that particular point. Multiple recordings from all portions of the hypothalamus will have to be taken before it can be definitely proven that strychnine spikes from any given cortical area are propagated to any given hypothalamic nucleus and no further.

Murphy, J.P. and Gellhorn, E. Further Investigations on Diencephalic-cortical Relations and Their Significance for the Problem of Emotion. J. Neurophysiol., 1945, 8:431-448.

McCulloch, W.S., Ward, A.A.,Jr., and Magoun, H.W. One Component of the Extrapyramidal System, (in preparation)

Keywords from the citations and related material:

1 Reprinted from J. Neurophysiol., 1947,10:309-314. ↩
2 This work was carried out under a grant from the Rockefeller Foundation. ↩
3 The authors wish to thank Merck and Co. who kindly furnished this drug. ↩
4 A square millimeter of filter paper soaked in a saturated solution of strychnine sulfate is placed on the cortex, causing those cortical cells to send out impulses in unison. This spikelike transient voltage can be recorded from any point to which a sufficient number of affected cells send their axons. This disturbance is propagated only in the ordinary direction of conduction and does not cross a synapse. ↩